In 1965, my father, who worked for IBM, was assigned to the south of France for two years, so the family packed up for Europe.  Back then, except for a few parodies in Pink Panther and James Bond movies, Americans in Europe got some respect.  Our money got a whole lot of respect – everyone wanted dollars.

My mother, who was an artist and appreciated fine drawing and engraving, drew the line at most European currencies.  “It looks like play money,” she said.  No wonder!  It was colorful and had big heads!  Real money, like good old yankee greenbacks, was sober and serious – it was monochrome and the heads were decently small.  I laughed the other day at a fast food restaurant.  I handed the clerk a twenty and he held it up to the light.  No one trusts a big-head! 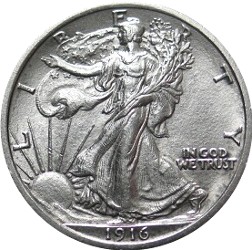 Our coins contained silver through 1965

My father was involved in the early development of magnetic card readers.  I remember his mood of euphoria the day engineers succeeded in programming a “1” and a “0” on a magnetic strip.  He announced that someday none of us would carry money at all.

“That sucks,” I said – my usual answer to my father when I was a teenager.  I thought of him today as I used my iPhone to buy a frappacino and then glanced at the budget headlines as I carried it out the door.

Money has always been abstract:  the great Lakota medicine man, Black Elk, called gold, “the yellow metal that drives men crazy.”  To his people, gold was just a pretty stone in the river – nothing to get excited about.

Now money is virtual as well – I used a pattern of pixels to buy my drink.  That doesn’t mean it doesn’t have as much power as it ever did – you can’t see or touch the wind, but this year especially, we have seen what it can do.  Still, in some ways, the increasingly non-material nature of money makes it seem all the more open to abuse.  As I understand it, the Fed doesn’t even have to print big-heads to increase the money supply – a few keystrokes will do it.

In truth, I love the convenience of electronic money.  A decade ago, when I was managing our affairs and my fathers, I had to write out 30-40 checks a month, a task that took a lot of time and was always subject to error, for my mind wanders when it is bored.  One Friday evening I wrote a payee the entire amount of my paycheck.  Luckily, that honest woman called me a few days later and said, “Uh, sir, I think you made a mistake.”

Abstract or not, we use our money for concrete things – a meal, a car, a house, a movie ticket, a new pair of shoes.  One immediately thinks of bartering, but these days, that seem rather strange.  In the last elections, a conservative senate candidate from Nevada suggested people might think of barter if their medical costs were too high.  Her opponents jumped on that statement, and their slogan, “Chickens for checkups” was a factor in her loss.

There is one aspect of money we do not think of often – in some of its forms, it is beautiful.  When I was a kid, I collected coins – just pennies for the most part.  I tended to spend anything bigger on baseball cards.  Now I have come to appreciate the sheer beauty of the two types of coins pictured here:  walking liberty halves, and standing liberty quarters.  These pictures show the amazing quality of the engraving.  Coins in this condition are premium, but fortunately, more heavily circulated specimens can be purchased for just a few dollars.  It’s quite an exercise in imagination to hold a coin that is 80 or 100 years old and wonder about its story.

It’s a lot more fun to think in these terms – of the beauty of money – than it is to think of our headlines or watch politicians on TV.  One thing “those European countries” did when we lived abroad, was periodically throw their governments out.  Even now, some nations hold votes of no confidence, which amount to a mass recall.  I remember feeling superior to that  – our system worked after all.  Now as I look at the big-heads in my wallet  – my mother’s old criterion for funny money – I doubt that I am alone in the fantasy of charging our leaders with high crimes of cluelessness and voting the rascals out.