When I was a kid, I believed that my family was the standard by which all families should be judged.  In the ’80’s, however, when family psychology met popular culture and some of us went questing for our inner child, the news was not so good.  We learned that 96% of families were dysfunctional; that crazy had become the new normal; that 24 out of 25 of us had grown up with the Griswalds and not the Cleavers!

Just when we thought we had that settled, when I thought my cred as a free thinker and iconoclast was safe, a new book threatens all that: Are You Normal?, by Mark Shulman.  According to a Washington Post article, Shulman’s book has 176 pages of questions for kids, scored against other answers, which allows you rank yourself on a “weird-o-meter.” 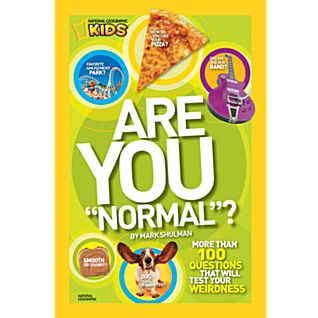 With some trepidation, I answered the sample questions in the article, going for the perspective I would have had in grade school.  Feel free to ride along – if you dare:

1) Do you have a brother or sister:

Yep – one sister, making me one of the 87.5% who have a sibling.  So right of the bat, it’s not looking good for the bohemian persona.

2) Have you ever faked being sick to get out of school?

Well duh, of course I did!  Can we say, “World Series?”  That boosted my weirdness quotient, since only 25% answer yes to this one.

3)  Where do you bite the chocolate bunny first?

The ears of course, along with “more than half”  of those polled.  Interestingly, 1 in 25 go for the bum…now that is strange!

I started to say “chunky,” but that’s revisionist history.  As a kid, it had to be smooth, lest it tear my Wonder Bread.  “Slightly more than half,” share that predilection.

Not then, not now, though it wasn’t nearly as common when I was a kid as it is now (56% answer “yes”).  My parents had a portable with rabbit-ears, but those were the days when, if the TV “went on the fritz,” you pulled the tubes and carried them down to the tube tester at the local grocery store.

6)  Did you ever bite your fingernails?

Rarely but on certain stressful occasions, yes.  The answer to that was a 50/50 split.

7)  Did you ever bite your toenails?

Ewww!  And that reaction is not unique.  A full 90% say they “could not or would not” do such a thing, so most of us are plain vanilla on that score.

The Washington Post review concludes by saying “the real point of the book is to show that nobody is perfectly normal or perfectly weird.  We’re all unique, and that’s part of what makes us special.”  Not such a bad conclusion to reach.

However, if “special” is now normal,  but normal normal is weird…I guess I better not go down that road, just quit while I’m ahead.

9 thoughts on “Are You Now, or Have You Ever Been Normal?”