Several people had wonderful things to say in response to preceding birthday post, where I restated what has become the mission statement of this blog:  to look for the fantasy in all realities and the reality in all fantasy.  The comments were almost too kind – but not quite – and they prompted me to begin several posts on people and things that have shaped my thinking about imagination.  What jumps to mind first is movie released in 1984.

The Neverending Story, 1979, a fantasy novel by German author, Michael Ende, was translated into English in 1983.  A film was released the following year, which I saw in the early ’90’s, after one of my psych professors said, “It’s a story about our culture’s war on imagination.”

A lonely boy named Bastian loves to read.  One morning on the way to school, he ducks into a bookstore to escape pursuing bullies.  He asks the grumpy store owner about an intriguing book called, The Neverending Story.  “It isn’t safe,” the owner says.  At an opportune moment, Bastian “borrows” the book and carries it into the school attic to read.

The book relates how the kingdom of Fantasia is under attack by the Nothing, a dark void that consumes everything it touches.  The creatures of Fantasia appeal to their ruler, The Childlike Empress, but the Nothing has made her ill.  She summons Atreyu, a warrior of Bastian’s age, to conquer The Nothing, and gives him a magical talisman, the AURYN to guide him on the quest.  The force behind The Nothing summons Gmork, a wolf-like beast who craves power, to kill Atreyu.

The AURYN. Stephen Spielberg keeps the original prop in his office

Nowadays we’d call this a middle-grade book, but 33 years ago, when The Neverending Story was written, that label didn’t exist.  Most books written for young people, then and now, focus on personal issues.  Bastian is lonely and has trouble at school, but this is just the inciting action, not the real subject of the story.  The book and movie are unique in presenting a very adult theme – imagination and the forces arrayed against it – in fiction for this age group.

Atreyu finds no clues concerning the Nothing, so he risks the Swamps of Saddness to find the wisest being in Fantasia. Those who succumb to the sadness sink into the swamp and are lost. This is the fate of Atreyu’s beloved horse, Artax.

The wise being  cannot help, but directs Atreyu to the Southern Oracle, 10,000 miles away.  While trudging through the swamp with Gmork on his trail and little chance of success,Atreyu begins to sink into despair.  A Luckdragon named Falkor rescues him and carries him most of the way to the oracle. 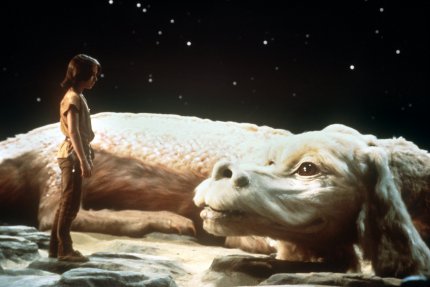 The oracle tells Atreyu that the only way to save Fantasia is for a human child, who lives beyond the borders of the realm, to give the Childlike Empress a new name. Then the oracle crumbles, a victim of the Nothing.

Falkor and Atreyu seek the border, and find the Nothing, which has become incredibly strong. Atreyu encounters Gmork who explains that Fantasia is “humanity’s hopes and dreams,” while the Nothing is “human apathy, cynicism, and the denial of childish dreams.”

Atreyu kills Gmork but is wounded and nearly falls victim to the Nothing. He is rescued once again by Falkor, but when he regains consciousness, only fragments of Fantasia remain, floating in the void.  The two make their way to the Ivory Tower, where Atreyu tells the Empress he has failed.

She says no, he has succeeded.  His quest was the only way to draw the attention of the human child, who is listening to them as they speak.  Bastian realizes she is talking of him.  As the Nothing begins to consume the Tower, the Empress begs him to say her name.  Bastian races to the attic window, and cries, “Moonchild!” into the face of an approaching storm.  He finds himself face to face with the Empress, who reveals that the Nothing has consumed all of Fantasia but a single grain of sand.

The Empress gives Bastian the last grain of sand of Fantasia

The Empress tells Bastian that his imagination and wishes have the power to restore the land to its former glory. In the final scene, we see Bastian soaring on Falkor through skies in Fantasia and his own world.  I wasn’t crazy about the ending.  There’s a Disney quality though out, since in the days before digital animation, films like this relied  on animated models and actors in costumes, but that was not necessarily a liability.  Jim Henson pulled it off without missing a beat in Dark Crystal, 1982.

In the last scene of The Neverending Story, I’m aware of watching a children’s movie, which disappoints, since most of the film was greater than any such category.  Even so, in the 20 years that have passed since I saw the movie, I’ve never forgotten the chords it struck concerning imagination.  Please take a look at this clip of Atreyu meeting Gmork to get a sense of the movie’s scope:

In succeeding posts, we’ll look at some views of Depth Psychology and certain spiritual traditions.  For both of them, literalism is the enemy of living with soul and imagination.   The Neverending Story tells us this is a battle we each must fight in our own hearts and minds.  The world of practical affairs and the marketplace have never had much use for the world’s dreamers.  Can we still manage to hear the cries of the Otherworld beings who fade into nothing at our lack of attention?  “Rosebud” in Citizen Kane is the dying cry of someone who lost Fantasia.

The Neverending Story echoes world folklore in showing the need otherworld creatures have for humans.  Irish and Scottish fairies steal mortal children.  The fairy queen sought out Thomas the Rhymer to be his consort for seven years, the same length of time the sea nymph, Calypso, held onto Odysseus in ancient Greece.  Why do such beings need us for redemption?

These are just some of the questions this apparently simple “children’s movie” raises.  They are far to complex to answer here, but I plan to take some additional forays into imaginal realms in the next few posts, so please stay tuned.

7 thoughts on “The Neverending Story: A Movie Review”