Not long ago, I came upon a post by Zen practitioner, Tomas Qubeck, called “Zen: How to Recalibrate Myself Back to Zero.”  Tomas discusses his love of solitary retreats.  I’m with him on that score, but then he adds an unusual twist – “Just recently I have realized that this ‘zero’ refers to ‘zero purpose’.” 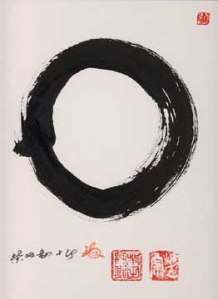 I know from experience that letting go of purposeful action for any length of time is a very difficult practice.  Why would one even bother?  Tomas observes that an urge to be purposeful often “shows up in my mind, [as] an image or…a sense of how I want to feel or be. All of this necessarily involves a moving away from how and what I am just at this very moment.”  Sometimes busy-ness can be an addiction, he says.

I’ll leave you to read his reflections, which have nothing to do with quitting our jobs, living in caves, or any other oddball decisions his title might suggest if you take it literally.  My own thoughts veered in a different direction.  Thinking of “purposeful action,” reminded me of something I heard Zen teacher, Edward Espe Brown say at a day long retreat:

“No matter what you do, your inner authorities will not be pleased.”

I’ve written several posts about Edward Brown.  I enjoy his humor, the deceptively “simple” depth of his insights, as well as the wisdom he gained as a chef and the recipes he shares in his Tassajara Cookbook.  I’ve attended three retreats with him in as many years and jotted down some of his pithy statements.  In Zen, one carries such sayings in the mind, turning them over until fresh meaning emerges.  Here are four others I’ve found valuable.  I often remember them at interesting moments.

What is precious in us doesn’t come and it doesn’t go.  It is not dependent on performance.

No one else can give us permission to be who we are.

There is no by-the-book way for you to be you.

As you might guess, Edward Brown, who was trained in traditional Zen by Shunryu Suzuki Roshi, is charting his own course these days.  If you want to learn more about his style of cooking and Zen, you can visit his home page and and listen to some of his teachings at The Peaceful Sea Sangha website.

8 thoughts on “Permission to be ourselves”