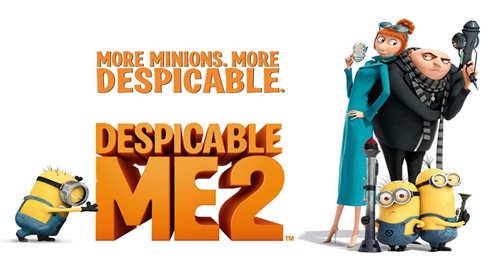 In this year of superheroes and sequels, with intrusive digital effects everywhere you turn and an actor who should know better wearing a stupid dead crow on his head, it is July and I’ve been to the movies exactly twice.

I had the most fun at Despicable Me 2, and was delighted to find it a beautifully crafted film.  If you’ve been waiting…and waiting…and waiting some more for a movie worth venturing out to the cineplex, the drought has lifted with this one.

Disclaimer:  I get nothing in return from anyone for writing this review, but I’m still sort of hoping that karmic forces, somehow and somewhere may award me a minion or two for my efforts.  Come on – wouldn’t you like a few of the happy little guys to do the chores around your home?

You know you would…

4 thoughts on “Despicable Me 2”