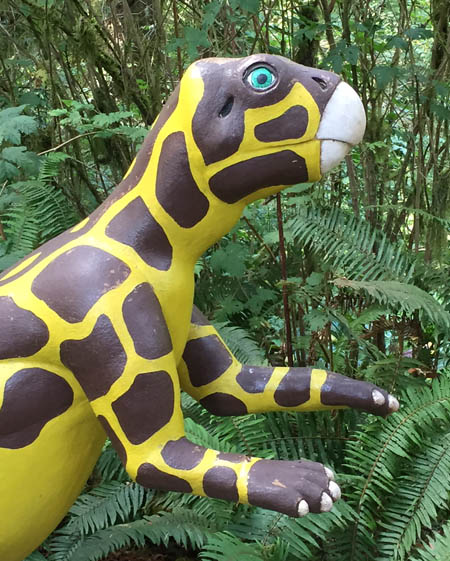 Dinosaurs continue to fascinate. My first ambition in life, after a trip to the New York Museum of Natural History, was to become a paleontologist. Eventually, my life goals changed, and the T-Rex envy faded.

Yet decades before Jurassic Park was a gleam in some screenwriter’s eye, Ernie Nelson, of Eugene, Oregon, did not outgrow his fascination with dinosaurs. He made them his life’s work in a most unusual way.

In 1953, Nelson gathered his family and left Eugene, where he worked as a CPA and owned a Mill supply company, to relocate to a valley near Port Orford, where rainfall averaged seven feet per year – he needed a rain forest.

In 1955, he opened the Prehistoric Gardens, and over 30 years, built 23 full size and anatomically correct dinosaurs. This unique roadside attraction is still in the family. Ernie’s granddaughter welcomed Mary and me in August, after we’d driven down from Bandon to see the dinos. 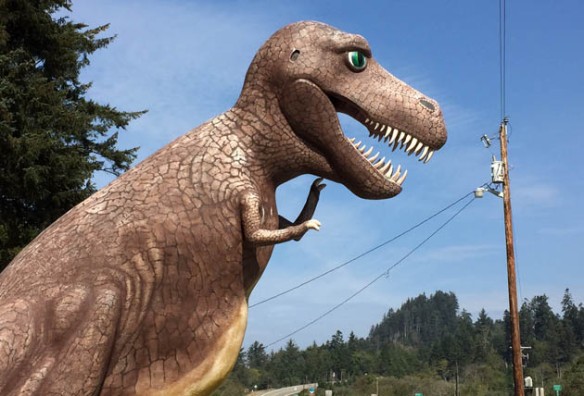 Not what you expect to see when you round the bend on the coast highway, but then, to paraphrase Monty Python, no one EVER expects a Tyrannosaurus!

Nelson’s process was painstaking. His research was constant and thorough, and included a  trip back east to visit the Smithsonian. Each dinosaur began with a steel frame, which was then covered with a metal lath. A layer of concrete followed, and then another layer to define the visual features.  The Brachiosaurus, 86′ long snd 46′ high, took four years to complete and was his pride and joy. 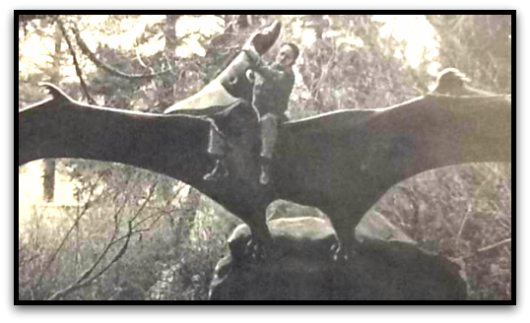 Ernie working on the peterandon

The Prehistoric Garden’s website says the 23 sculptures were painted according to available scientific research. We normally don’t think of dinosaurs as colorful, though plenty of lizards, chameleons, and snakes in our world are.

I’m willing to trust Ernie on his color choices, but what I liked best was the aspect where I think imagination overrode research. Some of these critters are just so darn cute in, a wide-eyed sort of way.  I don’t want make Ernie turn over in his grave by calling his critters “cute,” but there’s just no other word for this triceratops, which has the same expression as one of my dogs! 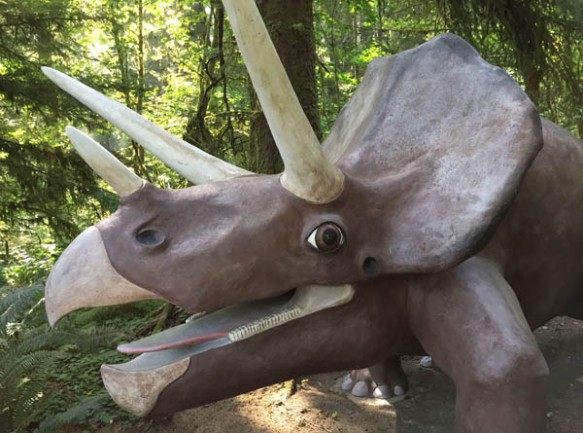 Some of us can remember the days of wacky roadside attractions on Route 66 or Hwy. 99 – giant oranges, strange animals, and gas stations designed to look like flying saucers.  There were animal parks, fairytale towns, and north pole villages in the days when Ernie Nelson moved his family to southern Oregon to shape his dream in concrete and steel.

The ichthyosaurus is suffering from the drought this year just like we are.

Nowadays the most frequent sights, as we blow past towns on the interstate, are fast food joints and the same old big-box stores. Santa’s Village has long been shuttered, and the kids have video games and DVD’s to mitigate the boring view out the windows.

Like the dinosaurs, the Prehistoric Gardens speaks of a different era, one in which peace had come, America was unrivaled, and more people than ever before had jobs, cars, money, cheap gas, kids, health care, and paid vacations.

All those attributes can ebb and flow, but there is one precious thing we can always borrow from Ernie Nelson – the example of what an individual can do when he rolls up his sleeves, opens his mind and heart, and lets his creativity flow.