Today I set a photo of Lady Liberty as header for this blog, which is entirely consistent with its six year old title, “The First Gate.” She guards the gate through which many of our ancestors of non-native descent came to this country. Her light has been a beacon of hope for the world for several centuries. Never perfect – no institution is – this light is under attack in a war for the soul of the nation. Vicious forces, now in power, seek the transformation of our democracy into a tyrannical plutocracy.

Lady Liberty will remain at the top of this blog until the current administration is removed from power, or until writing a blog like this becomes illegal, whichever comes first…

This is not so much an article, as much as a collection of notes and images, like the jottings, sticky notes, and bookmarked URL’s that percolate into the articles I write. There hasn’t been time this week for percolation, so here are some tidbits, both distressing and encouraging…

1. Definition:  Plutocracy – A government controlled exclusively by the wealthy either directly or indirectly. A plutocracy allows, either openly or by circumstance, only the wealthy to rule. This can then result in policies exclusively designed to assist the wealthy, which is reflected in its name (comes from the Greek words “ploutos” or wealthy, and “kratos” – power, ruling).

To those who voted for the current administration – is this what you wanted? Because it is what you elected.

2. The Pledge of Allegiance:  Do they still make kids recite this in schools? If so, all school districts of integrity should immediately stop the practice. To force children to say, “one nation, indivisible, with liberty and justice for all,” is to make them repeat a lie, and indoctrinate them with the kind of hypocrisy which infects our overlords.

3. Donald Over the Edge? – The Washington Post reports that Jason Chaffetz (R-Utah), chair of the House Oversight Committee, is “weighing legislation to require presidents to undergo an independent medical examination, including for mental health. Chaffetz cautioned that he wasn’t ‘talking about some of the rhetoric that’s flying around’ about Trump. Still, he said, ‘If you’re going to have your hands on the nuclear codes, you should probably know what kind of mental state you’re in.’” The 25th Amendment to the Constitution outlines the means by which the Vice President and members of Congress may remove a president for office when he is unable to adequately serve.

4. Join #TheResistance: This was a hashtag I first saw on Twitter back in December (I think), and thanks to three million women and their allies last week, has made it into the mainstream.  From the cover of Time to the millions following the rogue twitter accounts of the government agencies Trump tried to shut down, to those protesting at JFK this afternoon, to Jerry Brown, Bernie, Elizabeth Warren, to everyone who values the ideal upon which this nation was founded, now and every day until he is out of office is the time resist the lies, fear, and unconstitutional tyranny now propagated by Donald Trump and his cohorts. Push back against the bullshit storm! 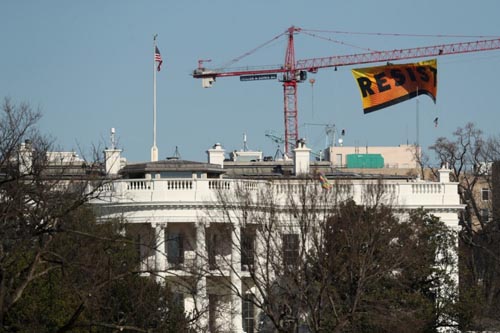 And finally, from a tweet by Senator Chris Murphy (D Conn), a reminder of the absence of core American and human values in the Trump administration: