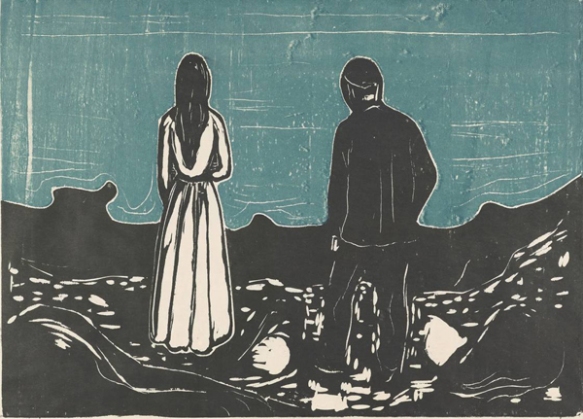 “In a dark time, the eye begins to see,
I meet my shadow in the deepening shade;
I hear my echo in the echoing wood—
A lord of nature weeping to a tree.” – Theodore Roethke, 1963

In a recent post I quoted Sri Daya Mata (Faye Wright), successor to Paramahansa Yogananda as president of Self-Realization Fellowship, describing a vision she had on a pilgrimage to the Himalayas in 1963:

“A huge black cloud suddenly swept over me, trying to engulf me. As it did so, I cried out to God…Through the practice of meditation, the all-knowing power of intuition develops in each one of us. I had intuitively understood what the Divine was telling me though this symbolic experience. It foretold a serious illness I was soon to undergo; and it also indicated that all mankind would face a very dark time during which the evil force would seek to engulf the world.

Daya Mata’s vision came to mind during the 2nd Democratic debate on July 30, when Marianne Williamson, a candidate I had initially dismissed as a lightweight, made the most pertinent observation of the evening:

“If you think any of this wonkiness is going to deal with this dark psychic force of the collectivized hatred that this president is bringing up in the country, then I’m afraid that the Democrats are going to see some very dark days.”

Both the concept of world ages and that of dark forces are pertinent metaphors for something we sense – and most cultures have explicitly believed – there are forces greater than what we can see behind and within what unfolds in the visible world.

An especially important image for me, is Soul as James Hillman used the word, (as when we say someone or something “has soul”), and the parallel image of soul loss. This metaphor has grown in importance for me as I’ve recently read both Hillman’s and his colleague, Michael Meade’s speculations on what loss of soul can mean for an individual or culture:

“There can be no ‘work around’ when the issues have become too large in scope to ignore or simply slip past, like global warming and climate change have become too big for current institutions to handle, while the complex web of cultural troubles we face are too great for most politicians to fully grasp, much less fix…….

The modern world, plagued by false rhetoric and tormented by intensifying polarities and ancient animosities, suffers from a collective loss of soul. Given the size and dimensions of contemporary problems and the fact that all aspects of both culture and nature are threatened, this is the exact time to awaken the underlying soul that secretly sustains both individual life and the life of the earth.” – Michael Meade Awakening the Soul: A Deep Response to a Troubled World, 2018.

Anthropologists describe a condition among “primitive” peoples called “loss of soul.” In this condition a man is out of himself, unable to find either the outer connection between humans or the inner connection to himself. He is unable to take part in his society, its rituals, and traditions. They are dead to him, he to them…His personal myth and his connection to the larger myth of his people, as raison d’être, is lost. Yet he is not sick with disease, nor is he out of his mind. He has simply lost his soul. He may even die.”

When I heard of the latest mass shooting in Gilroy, it struck me that we now have so many that no one tries to explain them anymore, but loss of soul may be the best explanation that very few have put forward. What else would drive so many young men (for the most part) to murder strangers at an ever increasing rate?

Note: As I sat down to finish this post around noon, PDT, on Saturday, August 3d, I saw that the latest mass shooting is underway in El Paso, Texas – not quite a week after the Gilroy incident.

As I had been thinking of soul loss, at the individual and national level, the news brought to mind our collective response and the now well established psychological concept of “learned helplessness,” – the apathy, stress, depression, and multiple negative effects of a “real or perceived” inability to change negative stimuli in our environment. If you don’t know the concept, I urge you to glance at the link, because this seldom discussed syndrome is something we all suffer from to some degree these days.

What troubles you most? Gun violence? Children in cages? Climate change? The falling American empire? The growing international drift toward fascism?

What can you or I do about any of that?

More than we think, I believe. Not that there are magic levers any of us can pull or someone would have already done so, but I believe that now, more than perhaps at any other time I in my life, how we live and the choices we make matter.

Loss of soul is only half of the situation – soul retrieval is the other half of a vision and practice born in our ancient shamanic pre-history that is still a living tradition in some quarters, and a concept that may serve to help us orient ourselves in a world where more and more of our habitual concepts fail us.

Soul loss and soul retrieval is an immense topic, but a critical one, and I will offer some random thoughts next time.