This rather dramatic lead-in comes from a movie teaser: “Milarepa is a tale of greed and vengeance – demons, magic, murder and redemption. It is the story of the man who became Tibet’s greatest mystic.” http://www.imdb.com/title/tt0499238/ 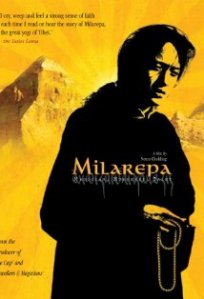 To borrow a term from the previous post, the stories of mystics and prophets are almost always strange attractors. History, shaped by our collective imagination of ultimate things, is guaranteed to be larger than life. Milarepa’s (1052-1135 CE) own teachings are found in the songs and poems he wrote, while the magical legends are from a biography written several centuries later.  The Dalai Lama said, “I cry, weep, and feel a strong sense of faith each time I read or hear the story of Milarepa, the greatest yogi of Tibet.”

Here is a one sentence synopsis: A young man in ancient Tibet commits mass-murder to save his mother, undertakes rigorous spiritual practice to expiate his sin, and becomes a saint whose teachings are still alive nine-hundred years later.

This is the story in greater detail:  Milarepa was born into a prosperous family, but his father died when he was seven, and the house and property went to a greedy aunt and uncle, who treated the family like slaves; they lived in a hovel, ate swill, and toiled in the fields all day.  When he was 15, Milarepa’s mother demanded that he visit a certain sorcerer and learn black magic to extract revenge.  If he didn’t do her bidding, she threatened to kill herself in front of him.

In our culture, where obeying your parents is optional, it’s easy to think the mother was just a whack job, and why didn’t someone think to call CPS?  To understand Milarepa’s story at all, we have to imagine a culture where family honor was more important than life itself.  Where a human incarnation was held to be infinitely precious, and your mother was revered as the chief giver of this gift.  Where allowing harm to come to your mother if you had the power to prevent it was an unimaginable sin.

We speak casually of choosing the lesser of two evils, and for most of us, the dilemma will be over once election day is past.  Not so for Milarepa.  The closest I can come to imagining him wrestling with his choice is to recall the scene of Gary Cooper on the mountain in Sergeant York, a Bible in one hand and the Constitution in another, trying hear the voice of his own conscience. 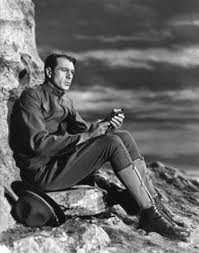 Milarepa chose to obey his mother.  He went to the sorcerer and learned a complex practice that allowed him to invoke spirts who pulled down the stone house where his uncle’s family was celebrating a wedding.  Thirty-five people were in the house.  Ironically, only the aunt and uncle survived.

All hell broke loose.  The relatives of the dead were furious and gave chase.  Milarepa barely escaped pursuit, but he couldn’t escape his own conscience or the negative karma for 33 murders that was sure to land him in Buddhist hells for quite a few incarnations.  His sorcerer contact advised him to seek out a famous guru named Marpa.  When he heard the name, a thrill went through Milarepa, as if a glimpse of his destiny had just opened up.  The night before he arrived, the guru dreamed of someone very special coming into his life.  Though he instantly recognized Milarepa’s potential, he also saw the dark karma and knew the boy would have to work it out before anything else could take place.

Milarepa asked for initiation into spiritual practice, but Marpa refused, saying such treasures were not for someone as “worthless” as he.  Instead, he told Milarepa to move a stone tower to another location three miles away.  It took Milarepa three years to carry the rocks on his back.  Marpa looked at his work, scratched his chin, and said, “You know what?  I think I liked it better at the first location.  Move it back.”

At that point, most of us would be on the phone to our therapist, but Milarepa did what he was told.  In those days, spiritual seekers sometimes endured great hardships and life-threatening journeys for spiritual instruction.  It was all right;  Marpa never wound up on the 6:00 news with charges of fraud or scandal.

Milarepa toiled for for twelve years before receiving spiritual initiation.  After that, he undertook an eleven month retreat in a sealed cave with only a butter lamp for light, and a little slot where someone passed him one meal a day.  Later he moved to another remote cave where he lived on nothing but nettles and local vegetation.  He looked like a living skeleton, but there he attained final awakening.  Just like the parable of the Prodigal Son and related stories from India, Milarepa’s tale asserts that no one is beyond redemption once they sincerely turn in that direction.

Naturally, there are miracle stories about Milarepa.  One of them tells that he pressed his hand into the rock wall of his cave where it still holds the impression.  Here is an online account of someone who visited the site:  http://www.dreammanifesto.com/milarepa-miracle-set-stone.html

“During a group pilgrimage to Tibet in the spring of 1998, I chose a route that would lead us into directly to Milarepa’s cave…To demonstrate his mastery over the limits of the physical world, Milarepa had placed his open hand against the cave’s wall at about shoulder level . . . and then continued to push his hand farther into the rock in front of him, as if the wall did not exist! When he did so, the stone beneath his palms became soft and malleable, leaving the deep impression of his hand for all to see…

In anticipation of my questions, our Tibetan translator…answered before I even asked them. “He has belief,” he stated in a matter-of-fact voice. “The geshe [great teacher] believes that he and the rock are not separate.” I was fascinated by the way our 20th-century guide spoke of the 900-year-old yogi in the present tense, as if he were in the room with us. “His meditation teaches him that he is part of the rock. The rock cannot contain him.” 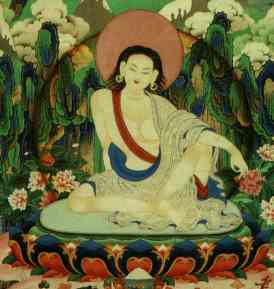 “In my youth I committed black deeds. In maturity I practiced innocence. Now, released from both good and evil, I have destroyed the root of karmic action and shall have no reason for action in the future. To say more than this would only cause weeping and laughter. What good would it do to tell you? I am an old man. Leave me in peace.” – Milarepa http://en.wikipedia.org/wiki/Milarepa

I’m all for stories of solitary heroes going against the crowd.  For stories of finding your life’s purpose and for tales of redemption and spiritual mastery.  My fiction always seems to circle around such themes, but for me, there is even more to the tale of Milarepa.  I’ve been fortunate enough to experience the living nature of his teachings in the person of Lama Kunga Thartse Rinpoche.

Born in Lhasa in 1935, he was recognized at the age of 7 as a reincarnation of Sevan Repa, one of Milarepa’s closest disciples.  He entered a monastery at 8, was ordained as a monk at 16, and became a Vice-Abbot at 24.  Lama Kunga fled from Tibet in 1959, and in 1972, he founded Ewam Choden Tibetan Buddhist Center in the hills just north of Berkeley (there’s a permanent link to the website on this blog). 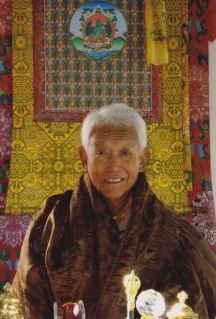 I met Lama Kunga two years ago while searching online for a particular Tibetan ceremony. I knew there was a place in Tucson and had calculated the cost of plane tickets when I found the ceremony was being offered at Ewam Choden, in two days time. I left a phone message, afraid there would be some barrier or pre-requisite, but when Rinpoche returned my call a little while later, he said, “Just come!” I asked if he was sure, and he said once more, “Just come, you are very welcome.”

Ewam Choden is just 90 minutes away, and I’ve been back many times.  On several occasions, I’ve sat through all day teaching sessions that end with the 75 year old lama more energetic than the students who are – at least speaking personally – desperate for a cup of coffee.

No rocks on the back or towers to move.  Lama Kunga is not that sort of teacher at all, as one can gather from the story written about him in the November, 2002 issue of Golf Digest, where he told the interviewer that good golf demands getting past the ego, but then said, “I would like to be reincarnated as a better golfer someday.” http://www.ewamchoden.org/?page_id=46

And finally, if the story of Milarepa seems like a pretty decent fantasy tale and nothing more, that’s fine. It would be fine with Milarepa and with the Buddha before him, who told a group of seekers, “Don’t take my word for anything.”

“Do not go by oral tradition, by lineage of teaching, by hearsay, by a collection of scriptures, by logical reasoning, by inferential reasoning, by a reflection on reasons, by the acceptance of a view after pondering it, by the seeming competence of a speaker, or because you think: ‘The ascetic is our teacher.’ But when you know for yourselves, ‘These things are wholesome, these things are blameless; these things are praised by the wise; these things, if undertaken and practiced lead to welfare and happiness’, then you should engage in them. (Numerical Discourses of the Buddha, p. 66)