Trying to find something appropriate to say on the occasion of a fairly incredible milestone like this is about as hopeless as trying to really comprehend one of those big birthdays, like turning 30 or 50.  Experientially, it feels pretty much like the day before, just as this feels pretty much like post 99 or post 17 for that matter.

What I can very truthfully say is how much I appreciate all my readers, all the comments I have received, and all the links I have followed to find kindred spirits sharing their own ideas.  There is no longer any doubt that community can exist in cyberspace.  Earlier this morning, in regard to something else, Mary reminded me of a detail from Peter S. Beagle’s, The Last Unicorn: unicorns don’t have to be in each other’s immediate company – as long as they know there are other unicorns in the world, they do not feel lonely.  Thanks to all of you.

I started this post the way I started many others:  with an idea and the hope that it leads somewhere.  Very appropriately, I think, for such a significant milestone, the idea led me to Alfred E. Neuman. 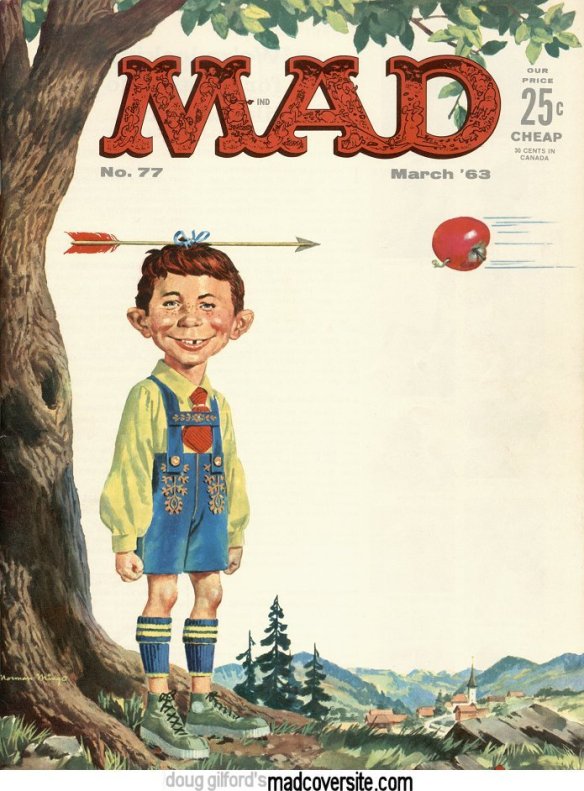 This is because Jen left a comment on my “Deja Vue All Over Again” post, regarding the school bomb drills.  “I couldn’t imagine how afraid they all must have been,” she said.  That triggered several vivid memories of photos and caricatures in Mad Magazine.  Mad parodied Kennedy and Kruschev.  The editors didn’t shy away from pictures of mushroom clouds.  In a way, they taught us the same technique that Harry Potter and his friends learned when faced with a boggart, those magical creatures that take the shape of your greatest fear.  When faced with a boggart, you have to look it in the eye and say the magic word, “Riddikulus!”

Mad taught members of my generation to say “Riddiculus” to much more than just the cold war.  Nothing was out of reach of the parodies.  Mad took special aim at Madison Avenue, popular culture, politics, education – in fact most all the artifacts of the “normal” world of adults.  Appropriately, I learned about beatniks from Mad. I seem to remember a picture of William Gaines, the founder, sporting a goatee.

One day my mother caught me coming home with a copy of Mad.  “Let me see that!” she said.  She snatched it out of my hand and flipped through it, thinking, I guess, that it was some new kind of Playboy. She chuckled once or twice and handed the magazine back.  “I guess this is all right,” she said.  Yes and no.  In many ways, Mad was far more more subversive for a grade school kid than Playboy could every have been.

More than once over the years, I have seen articles on Mad Magazine’s influence on the ’60’s counterculture, for it taught a whole generation to laugh at the world they were going to inherit.  Few sacred cows escaped Mad’s satire.  I assumed there would be lots of dissertations on that subject by now, but when I did I a search, I could not find any.  What I did find – and this would have made Gaines laugh out loud – was a term paper on Mad for sale, that had its basic facts wrong in the synopsis.

Mad has, however, made a significant contribution to the field of computer science through the work of Donald Knuth, Professor Emeritus of Computer Programming at Stanford.  Knuth is:

Author of the seminal multi-volume work The Art of Computer Programming, [and] has been called the “father” of the analysis of algorithms, contributing to the development of, and systematizing formal mathematical techniques for, the rigorous analysis of the computational complexity of algorithms. http://en.wikipedia.org/wiki/Donald_Knuth

Knuth’s first scientific article, “The Potrzebie System of Weights and Measures,” was published in a school magazine in 1957.  In it, he defined the basic unit of length as the thickness of Mad issue #26, and named the fundamental unit of force, the “whatmeworry.”  Mad bought the article and published it in issue #33, in June, 1957.

Remember that fun PBS show called, “Connections?”  The host, James Burke, loved to show how events, separated by centuries and thousands of miles, influenced each other.  So here, for this weighty and significant 100th post, is a brand new connection!   Think of it:  the influence of Mad Magazine on the man who taught us to analyze the sort of programming algorithms that make blogging possible.  Now if that’s not a happy thought, I don’t know what is!