The Inklings was the name of an informal literary group at Oxford that met for nearly two decades, between the early 1930’s and 1949.  Fans of fantasy literature know that regular members included authors J.R.R. Tolkien, C.S Lewis, Owen Barfield, Charles Williams, Neville Coghill, a Chaucer specialist, and Hugo Dyson who had been a member of the club that spawned the Inklings, “The Coalbiters,” a group founded by Tolkien to discuss Icelandic myth.

The Inklings discussed, among other things, myth, religion, and what we now call fantasy “world-building.”  Tolkien read chapters of Lord of the Rings and Lewis read his Narnia books.  They met on Thursday evenings in Lewis’s college rooms, and often shared lunch on Tuesdays at the Eagle and Child pub, commonly called, “The Bird and the Baby.” 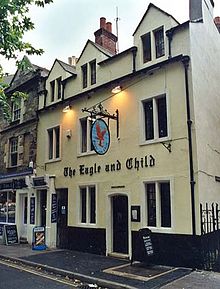 The Eagle and Child Pub, Oxford

Nowadays we call such literary clubs, critique groups.  You often hear fans of fantasy literature say, “Oh, to have been a member of that group!”

Lately I’ve been thinking of the downside of such associations.  If you were C.S. Lewis, what would you have done when Tolkien told you not to publish Narnia?  “You will embarrass yourself,” he said.

I also think about the first Harry Potter book, which would never have been blessed by any critique group.  J.K. Rowling broke too many rules.  For starters, she mixed elements of middle-grade fantasy with young-adult fantasy, and by all conventional rules, that is a no-no.  The problem is, conventional rules lead to conventional books.  Check out some book-jacket blurbs at the local Barnes & Noble to see for yourself if that’s true.

I can clearly remember when it wasn’t like this.  In the eighties I used to hang out at a quirky fantasy bookstore.  I could go in with a theme in mind like, “spirit guides in contemporary urban fantasy,” and walk away with a couple of titles the owner pointed out to me.  Try that at the Barnes & Noble!

Learning and practicing conventional wisdom is a part of mastering any craft.  I went through it in art school.  It was necessary, but eventually became like wearing mental blinders that prevented me from appreciating or producing work that ventured beyond certain boundaries.  The problem was, I could not see past the filters even when I started wanting to, because I had spent so much effort learning the rules.  Only with the passage of time – a lot of time – did my rigid ideas relax and dissolve.

Is there any way to speed up the process now?  Because now I know what is really at stake:  it’s about recapturing a spirit of freshness and play as a reader and a writer.

This morning I found myself rereading notes I had taken in March when I attended a retreat with Edward Espe Brown, an event I posted about at the time.  No wonder!  Brown is one of the least doctrinaire people I have ever met.  Here is the story that really stuck with me:  Brown was leading a meditation session, and as leader, his role was rather formal.  One day he sat down and reviewed his inventory of meditation techniques – which was extensive – to choose one to practice that day.  A sudden inspiration arose in his mind – Why don’t you just touch what is inside with warmth and kindness?

That is a very revealing exercise.  One of the first things that comes up for me you could call the “inner achiever.”  I bet most of us learned early in life to be virtuous and hard working.  Play only after you get your work done, and so on.

It’s easier to see the dynamic in meditation where nothing else is going on.  I tend to procrastinate more in attempting such a strange (warmth and kindness?) exercise in writing.  Yet a timed period of freewriting in the morning, before the daylight mind is fully awake, can lead to a startling result – it can open a doorway into play and an unexpected abundance of ideas.

I do this freehand in spiral notebooks and tell the inner achiever these are “warm up exercises.”  And after repeating this for a few days, I’ve witnessed ideas pouring onto the page, in such a profusion that it’s sometimes hard to keep up.  Try it and see.  For me it was something of a revelation.  I’ve done free writing before without experiencing this, but I suspect I was secretly harboring agendas along the lines of self-improvement or self-discovery or something like that.

Where are all these ideas going?  I really don’t know, and I am determined not to ask.  It’s too adult a question – “Are you engaged in an educational form of play?  Is this leading toward a measurable goal?  I have no idea.  I don’t even know if these ideas are “mine” or if “me” and “mine” have any meaning while this is going on.

Here are some other notes I jotted down when Edward Brown was here:

You can’t just make a simple decision on that one and then do some warm up exercises.  What was it that C.S. Lewis knew about himself and his work that kept him going when Tolkien told him Narnia wasn’t fit to publish?

That is a very important question for any writer who wants to listen to others without losing his or her own inner center of gravity.

4 thoughts on “The Inklings and Stuff”