I started this blog to write about stories, imagination, and spirituality.  Initially, when I spoke of stories, I meant fiction.  I now use the word in the wider sense suggested by James Hillman when he defined psychology as, “the study of the stories of the soul.”  I also use “stories” as Professor of Religion, David Loy, did in his book The World is Made of Stories, a meditation on the worldwide intuition that what we normally see is not “reality” but our stories about reality.

Right now, stories of money and its lack weigh on everyone’s mind. I have my own stories of recent events that I hesitated to share until yesterday, when I saw that Rush Limbaugh accused the president of, “engineering the decline of the American Republic.”  http://awareamerican.wordpress.com/2011/08/09/limbaugh-on-market-collapse-obama-engineering-the-decline-of-america/.  I decided that since it’s Amateur Hour, I might as well weigh in.  Here’s my story of why the United States and Europe find themselves in such a colossal mess:

We are still in the early stages of globalization, but no one seems to remember that.  Limbaugh should blame Al Gore for inventing the internet, the steam engine of our current post-industrial revolution.  The changes are going to take as long, be at least as sweeping, and at least as traumatic as those of the first Industrial Revolution.  Here are a few key events:

1)  NAFTA:  The North American Free Trade Agreement, which went into effect on Jan. 1, 1994, marked the beginning of the end of blue collar work as a viable means of livelihood for large numbers of people in this country. 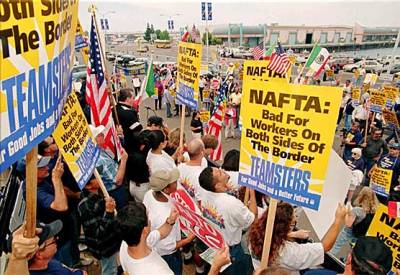 2) Offshoring White Collar Jobs:  This picked up in earnest in the late 90’s, as the internet made it feasible to hire large numbers of skilled foreign professionals for a fraction of the cost of their US counterparts.  I remember lots of phone conferences at the end of the day with engineers in Asia who would sometimes have solutions in our inbox in the morning.

The Y2K scare delayed the effects of sending thousands of tech jobs overseas, but once it was clear that the world was not going to end, the “dot com bust” ended the party for good.  Springsteen’s blue collar lyrics came true for professionals as well:  “Foreman says these jobs are going boys, and they ain’t coming back.”

3)  The Economy on Speed:  Thanks to Alan Greenspan, who held interest rates artificially low, and George Bush, who started two wars, the bust was delayed, but delayed only.  Quite a few people saw it coming:

Our problem now is not just that housing prices crashed in 2008, but that since the turn of the millennium, housing and consumer spending have been our major industries.

So what comes next?  Here are a few random suggestions and observations, not necessarily in order of importance.

1)  The President should demand to see Rush Limbaugh’s birth certificate.  Evidence suggests he is an alien – and I don’t mean the kind that comes from another part of planet earth:

2) On the Sunday before the debt ceiling resolution, I saw an interview with General Motors CEO, Dan Akerson, that made me hopeful.  Not only has GM paid back the government bailout, but they’ve done so with the introduction of fuel efficient cars.  Akerson articulated our need for independence from foreign oil that politicians since Jimmy Carter have talked about without effect.  Other American auto makers have echoed Akerson’s sentiment.  Now that greener energy is becoming profitable, there there is hope for eventual movement, growth and jobs in that sector.

3)  I’d like to see every Democrat in Washington read this article Julian Zelizer posted on CNN.com, “Where are the Democrat’s Ideas?”  http://www.cnn.com/2011/OPINION/08/08/zelizer.democrats.ideas/index.html?hpt=hp_t1

4)  We all need to look at the situation in Britain as an example of what could happen here if politicians try to balance the budget with only draconian cuts.  It’s time for people who care about the country to name the Flat Earth Party for what it is – an assortment of morons who don’t understand that they live in the 21st century and not in 1776.

5) Vote against any candidate who claims to have “a plan to create jobs” – they are either deluded or lying.  In discussions I’ve heard, usually referencing Japan, the only government action that seems to work is stimulus money applied for the long term, they way you have to use a lot of matches to start a fire with wet wood.   Unfortunately, we’ve exhausted the means and will to do that.

If you’ve actually read to the end of my rant, thank you.  It’s no more outlandish than claiming a single man could bring down our Republic all by himself.  To paraphrase Hillary Clinton’s book, it would take a village to do that – a large village, like Washington, DC.

2 thoughts on “Stories of the Fall”