She answers to Kit, but her real name is Kitsune, the Japanese word for fox.  That’s because when we adopted her four years ago today, she looked so much like a fox.

We’d been looking for a second dog for over a year and had even spent six weeks with a foster animal with the option to keep, but it didn’t work out.  We’d put the word out, and one afternoon it paid off.  The owners of a mom and pop kennel called concerning a year old animal that needed a home.

Kit had been rescued by a roommate from a couple who mistreated her and were planning to dump her by the side of a highway.  She was frightened of men, and at first ran away when I tried to pick her up, yet by the end of the day, she was at home in our home, and after a walk in the park the next morning, she was my new best buddy. 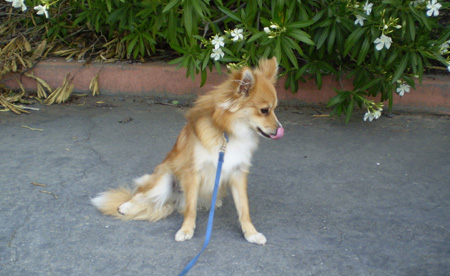 First walk in the park

She was just over eight pounds when we got her, and her ribs showed. Now she has the opposite problem – she’s on low fat kibble. Officially, she’s a Chipom, a Chihuahua / Pomeranian mix, although we suspect there’s something else in there, because she’s bigger than either of those breeds. We’ve wondered how much the dog DNA tests cost, sometimes wondering if she really might have a fox in the family tree.

Kit is foxlike in more ways than appearance, not all of them good.   Rescue dogs often carry baggage and hers manifests as aggression, which can be very sudden.  Work with a trainer has helped moderate it, but we’re still not done.  Kit is smart like a fox too, not always in healthy way.  Everyone thinks their dog is brilliant; let’s just say that this one, among other tricks, has learned how to paw the button to lower the backseat windows while driving.  We have to put on the lock as if she was a kid.  And an instant after such indiscretions, she’ll turn on the charm that makes strangers ask, “What kind of dog is that?”

Like any complex creature, she’s full of contradictions. She’s as brave as a dog twice her size, and the unquestioned alpha to the others, and yet she’s a wimp when it comes to rain. With tail between legs she’ll duck for cover if the drops start to fall on her arctic quality fur.

In the end, it’s like William Stafford said in his poem, “Choosing a Dog:”

“It’s love,” they say. You touch
the right one and a whole half of the universe
wakes up, a new half.