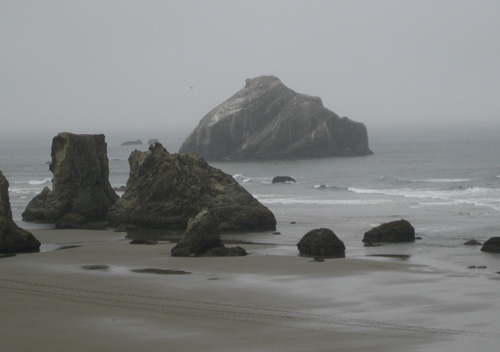 From this perspective, it’s easy to see how Face Rock, got it’s name.  Legend says that long ago, Chief Siskiyou from the mountains came to the sea to trade with the four tribes that lived in this region.  Warriors stood on the bluffs above the ocean fearing that the evil sea-spirit, Seatka might cause trouble.

Siskiyou’s daugher, Princess Ewauna, was not afraid of the spirit, and one night, when the moon was full, she slipped away from camp with her faithful dog and a basket with her cat and kittens nestled inside.  She went swimming, farther and farther from shore, ignoring the warning barks of her dog.  Seatka captured the princess.

Carrying the basket of cats, the dog swam out to Ewauna and bit the evil Seatka.  Howling, he shook off the dog and threw the cats into the sea.  Seatka tried to make Ewauna look into his eyes, but she refused and kept her gaze on the moon.  The dog ran on the beach howling, but in time, he, the cats, and Ewauna, still gazing up at the moon, were frozen into stone where they remain to this very day.

I first passed through Bandon, Oregon back in college days, and it’s one of those places that has drawn me back ever since.  I took the current blog header photo two years ago at a spot about half a mile up the beach overlook trail.

With the wind off the sea and afternoon fog, it is downright chilly.  I had almost forgotten what chilly is like, but I remembered this afternoon, rolling into town in cutoffs and t-shirt.  It’s hard to pack for cold weather when it’s 100+ degrees outside, so tomorrow will likely involve shopping for a sweatshirt.

This will probably be a quiet week on thefirstgates, as we wander the shore, listen to the ocean, and eat cranberry oatmeal cookies.

See you then, with more stories and photographs.