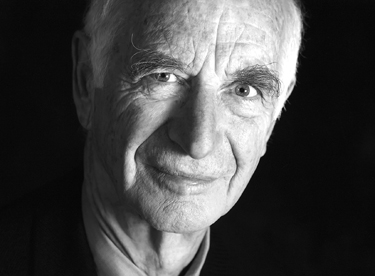 For decades, James Hillman brought us unique observations on modern life from the perspective of a depth psychology that embraced soul as its highest value.  Recently, I’ve wished I could hear his take on our current climate of political divisiveness, but Hillman, who died two years ago at the age of 85, wasn’t here to watch our most recent shenanigans.  Happily, I recently stumbled upon a pair of interviews in which Hillman discussed this very subject and set it in a context of massive cultural change.

Author and journalist Pythia Peay published the first interview on The Huffington Post in February, 2011 (Jungian Analyst Explains the Psychology of Political Polarization).  The occasion for their talk was the mass shooting in Tucson, which had happened a month earlier.  The most prominent victim was Representative Gabrielle Giffords.

Tragically, memory of that event, just two and a half years ago, has been lost in the wake of more recent carnage, including the Nevada school shooting earlier this week.  Though Hillman’s comments focused on the role of political divisiveness in the attempt to kill a congresswoman, his additional statements now seem eerily relevant to the 12 year old in Sparks who was so alienated that he ended his life with murder and suicide.

Hillman began with a general discussion of polarized thinking.  “Polarity,” he reminds us, is an electrical engineering term.  Batteries have poles; the psyche is far more nuanced than that, dwelling in shades of gray rather than black or white.  Ideological extremes subvert our ability to judge individual issues on their merit.

When asked if violently polarized politics caused the shootings, Hillman changed the focus to another kind of cultural rigidity and its effect on the Tucson shooter:

“I think that this kid was made a loner by an American educational system in which there is no room for the weird or the odd…We need to have an educational system that’s able to embrace all sorts of minds, and where a student doesn’t have to fit into a certain mold of learning. Our educational system has become so narrowed to a certain formula, that if you go through a weird phase, you’re dropped out — often at the age of schizophrenia, 19-23 — and that’s the danger.”

Arguments in the wake of gun violence bog down in specifics, like background checks and how many bullets a magazine should hold – we don’t ask why and how we’re producing more and more people prone to mass violence.  In the end, says Hillman, for a culture that pays so much lip service to “the individual,” we are terrified of real individuality, and attempt to stamp it out.

In the second interview, America and the Shift in Ages, Hillman suggests that much of that rigidity has to do with futile attempts to shore up outmoded systems and institutions during a period of massive change.  Not just one but “three or four” myths that are central to our culture are collapsing.

Everything we fear has already happened said Hillman:  “The fragility of capitalism, which we don’t want to admit; the loss of the empire of the United States; and American exceptionalism. In fact, American exceptionalism is that we are exceptionally backward in about fifteen different categories, from education to infrastructure. But we’re in a stage of denial.”  Other beliefs and structures are crumbling as well, he said.  White supremacy, male supremacy, the influence of monotheistic religions, and the belief that we are “the good people.”

If such institutions do not appear to be in decay, it’s because they are so staunchly defended, and that, Hillman says, is a sign of their lack of vitality — “If they were vital they wouldn’t need to be defended. And the fanaticism we’re witnessing goes along with the deterioration of the vitality of these myths.”

Many of our fundamental beliefs are under scrutiny and need to be.  Hillman mentions the meaning of “freedom.”  For many, freedom means, “I can do any goddamn thing I want on my property; that I am my own boss and don’t want government interference; that I don’t want anybody telling me what I can and can’t do.”  This, he says, is the freedom of an adolescent boy.  What of the different kinds of freedom, such as “freedom from the compulsions to have and to own and to be someone?”  What of the freedom Nelson Mandela found in prison?

Hillman cites economic assumptions that need to be questioned as well.  Falling demand needs to be stimulated, according to current assumptions, but from an ecological point of view, that’s exactly what the world needs at this time.  Sustainability models, which may be our hope for the future, terrify those in positions of power.

Many of our current fears, says Hillman – from fear of immigrants crossing our borders, to fear of failing education, to fear of cancer, to economic insecurity, terrorists, and of course fear of “the other” political party, results from the lack of a wider framework in which to understand the massive shifts that are already underway.

There is no going back, but as obsolete structures crumble, we can glimpse, if we look, new forms emerging.  Hillman gave the example of a “Bioneers” conference he attended where Paul Hawken showed a film that was simply the names of individuals and organizations involved in trying to innovate ways of building communities, economic systems, and ways of dealing with the natural world.  Hawken said there were thousands of names, and the film could roll for weeks.

Hillman said it’s important not to try to fit emerging structures into the patterns of the past.  For our peace of mind, a new kind of faith is required:   “I think it’s a matter of being free-wheeling, and trusting that the emerging cosmos will come out on its own, and shape itself as it comes. That means living in a certain open space — and that’s freedom.”

Such words are a fitting conclusion to the lifework of a man who lived in defense of Anima Mundi, the World Soul and who taught that animals, trees, and rivers are intelligent and alive, and that at some deep level of the psyche, we can hear their voices.  In Hillman’s life work, observation of the modern psyche led to conclusions that mesh with the myths of the ancestors.

A thousand years from now, people will read of our times and shudder, as we do in contemplating the rigors of life in the middle ages.  A few visionaries stood out from the rest, those like Saint Francis, Dante, and Leonardo, who pointed toward a more benevolent and expansive future.

We cannot write our own history, but we can wonder how it will look to those in the future.  I am convinced that James Hillman will be remembered when most of what passes for news on TV is blessedly forgotten.

55 thoughts on “James Hillman on world change and political polarization”