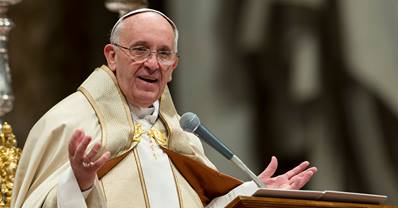 “How can it be that it is not a news item when an elderly homeless person dies of exposure, but it is news when the stock market loses 2 points?” – Pope Francis (1)

On Tuesday, Pope Francis delivered a sharp rebuke of unfettered capitalism as “idolatry of money” that will lead to “a new tyranny.” (2)  His language was specifically directed at those in the United States who continue to defend “trickle-down economics,” which he said “has never been confirmed by the facts, [and] expresses a crude and naive trust in the goodness of those wielding economic power.”

“Meanwhile,” he said, “the excluded are still waiting.”

President Obama said he was “hugely impressed with the pope’s pronouncements.”  Nevertheless, on Wednesday, the US announced it will close its Vatican embassy as a “cost saving measure.” (3)  The seven embassy staffers will be retained, just moved beyond the borders of Vatican City, which is the world’s smallest sovereign nation.

Republican senators, many of whom still advocate the trickle-down policies the pope condemned, were quick to denounce the administration’s move as “a slap in the face to Catholic Americans around the country.”

Though I’m not a Catholic, I find myself deeply grateful on this day of thanks, for the current Vicar of Christ.  When politicians of all persuasions spend most of their time defending an increasingly dysfunctional status quo, it is refreshing and marvelous to find a world leader willing to speak the truth.