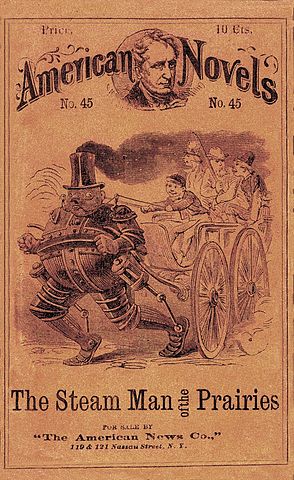 The Steam Man of the Prairies, 1868. Public Domain.

An obscure author, Edward S. Ellis, who published a dime novel called The Steam Man of the Prairies 145 years ago, may prove to have been a visionary according to two recent news articles.

The first, in the New York Times, reports that Google quietly acquired seven robotics companies over the last six months (Google Puts Money on Robots).  The scale of the investment is huge and appears to be aimed at automating manufacturing processes.  “The opportunity is massive,” chirped Andrew McAfee, an M.I.T. research scientist.  “There are still people who walk around in factories and pick things up in distribution centers and work in the back rooms of grocery stores.”

The second article I noticed bears an uncanny relation to the cover of  The Steam Man.  The California DMV has set rules for companies aiming to test automated cars (Driverless Cars Could be Cruising California Roads by Spring).  To put it in the terms of the M.I.T scientist, we may soon be able to robotize trucks and remove even more inefficient humans from the workforce.

The problem with this manufacturer’s wet dream should be obvious.  Robert Reich, former Secretary of Labor under Bill Clinton puts it simply: “the economy remains lousy for most people. It will likely remain that way: As technology and globalization take over the economy, the U.S. has no national strategy for creating more good jobs in America.” (The True Price of Great Holiday Deals).

Economic discussion, with few exceptions, focuses on how to get back to the good old days of (relatively) full employment and opportunity for those who work hard.  Politicians bicker over which levers to pull, but no one dares to ask the fundamental question: has the structure of the world economy changed too much to recapture that particular sort of past “good times?”

A few years ago, news got out of worker mistreatment at Foxconn, the huge Chinese assembly plant where much of our high-tech gear is assembled.  Foxconn agreed to reforms, and the CEO announced plans to deploy a million robots.  By December 2011, robotic arms had reduced the number of workers on certain assembly lines from “20 or 30 down to 5.”  As we argue over fair wages for fast food workers, it’s a good bet their employers are working on ways to automate the task of making a burger, which can’t be harder than plugging components into a motherboard.

The problem, of course, is that downsized workers will not be buying either Happy Meals or iPhones.

Last March, in a post called Robots ‘R Us (?), a first look at such issues, I quoted a blogger named Orkinpod who was already considering them in depth.  On Feb. 27 he said:  “When the future arrives (and I believe that it is very, very close), and machines can supply all the things that humans could possibly ever want, what is everybody going to do?”

One thing many may wind up doing is working on food production.  Last summer I wrote of a compelling PBS NewsHour series, “Food for 9 Billion” (1).  That’s the total number of hungry humans who will occupy the planet in 2050 as the amount of arable land continues to shrink.  One of several examples given of coming change was Singapore, where five million people live on an island with only 240 acres of undeveloped land.  A 50 year old Singapore engineer developed a revolutionary type of vertical greenhouse that prompted the Directer of the National Institute of Education to say, “I think, eventually, urban factories for vegetable production will take the place of electronic factories in Singapore.”

It’s a grand irony to reflect that industrialism, which began by channeling people out of agriculture, may have succeeded too well; its end game my involve shifting some of them back into food production again.  But what about everyone else?  What happens as robotics and marvels like 3D printers leave ever more people idle?  Insiders aren’t even asking the question, though science fiction writers have since the mid 20th century. 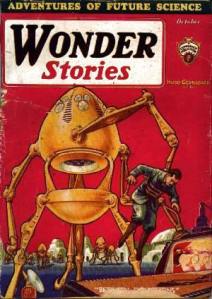 Unfortunately, in stories where humans go up against robots, the outcomes are usually not the ones we would like to see.