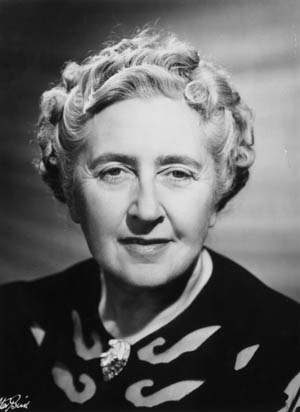 The Guinness Book of World Records lists Agatha Christie as the best selling novelist of all time. Over the years, I’ve done my part in helping to make her so.

Christie’s preferred fictional murder weapon was poison. Of the more than 300 people who died in her stories, at least 100 ate or drank something they did not live to regret. In a fun segment on last week’s Science Friday, Ira Plato interviewed Kathryn Harkup, chemist and author of A is for Arsenic: the Poisons of Agatha Christie.

From 1914 to 1918, Agatha Christie volunteered as a nurse at a local hospital, and worked in the dispensary when it opened. Back then, all pharmaceuticals were mixed on site, and none of our modern restrictions on drugs were in place, so of necessity, Christie acquired a detailed knowledge of theoretical and applied chemistry in order to pass her apothecary’s assistant exam in 1917. She learned what to do, and more importantly for her future literary career, what not to do with medicines. She was tutored by a local pharmacist who carried a lump of curare in his pocket, “because it made him feel powerful.”

Christie started writing in her twenties and did not meet with instant success. Kathryn Harkup gives an example of the plot complexity of her first published novel, A Mysterious Affair at Styles, 1920.

The elderly victim is killed by with a lethal dose of strychnine, which at that time, was given, in measured doses, to the elderly as a tonic.  The killer, however, added bromide, a popular sleeping powder, to the solution, which caused the strychnine to precipitate out as crystals at the bottom of the bottle. The final teaspoon would be lethal, and the killer could arrange an airtight alibi.

Harkup’s research revealed that Agatha Christie had studied the effect of combining these two drugs as a lesson in what not to do, in the course of her apothecary training.

If you have ever watched a Hercule Poirot or Miss Marple movie, or purchased one of the two billion copies of Agatha Christie books that have been sold, you’ll want to check out the Science Friday interview!

2 thoughts on “Her Poison Pen”