There is only the fight to recover what has been lost
And found and lost again and again; and now, under conditions
That seem unpropitious. But perhaps neither gain nor loss.
For us, there is only the trying. The rest is not our business. – T.S. Eliot

In the previous post, I discussed the current “dark time,” or Kali Yuga, from the view of time as a series of ascending and descending ages, without beginning or end. The post ended with video clip from Peter Brook’s Mahabharata, where a young man asks, during a brutal civil war, “If the times are hopeless, why do we fight?”

Past critical turning points in history, involving the rise and fall of nations and empires, often hinged on battles. “Why” may have been the central question then, but now, as climate change marks an inflection point for the whole planet, we also face the questions of “Who (or what) do we fight?” and “How?” For us, these may be even more difficult than why, although that is the issue I will consider first.

As a college freshman, working my way through The Iliad, I had to get a handle on the concept of arete, meaning virtue or honor. Because this was the epic of a decade long war, in The Iliad, arete meant martial courage and prowess. The Vietnam war was raging then, and arete sounded too much like the prattle of those politicians who wrapped themselves in the flag to drum up dwindling support for a war that was a horrible mistake.

Now I understand arete from a wider perspective. The word meant “‘excellence of any kind.’ The term may also mean ‘moral virtue.’ In its earliest appearance in Greek, this notion of excellence was ultimately bound up with the notion of the fulfillment of purpose or function: the act of living up to one’s full potential..”

Arete means seeking to do what is right in every circumstance.

Yogananda’s prophecy as well as the Hindu and Tibetan Buddhist legends of Shambhala suggest that our world will continue its descent into darkness, greed, and warfare, but in time (calculations range from a few hundred to a few thousand years) renewal and the start of the ascending cycle or yugas will begin.

And in the meantime?

What comes to my mind iis the Norse story of Ragnarök, “a series of events, including a great battle, foretold to lead to the death of a number of great figures (including the Gods Odin, Thor…Freyr, and Loki), natural disasters and the submersion of the world in water.”

The gods of light continue to fight the powers of darkness, knowing that they and their world will be destroyed, in no small part because the prophecy also says, “After these events, the world will resurface anew and fertile, the surviving and returning gods will meet and the world will be repopulated by two human survivors.” This too, sounds a lot like an account of the current Kali yuga! 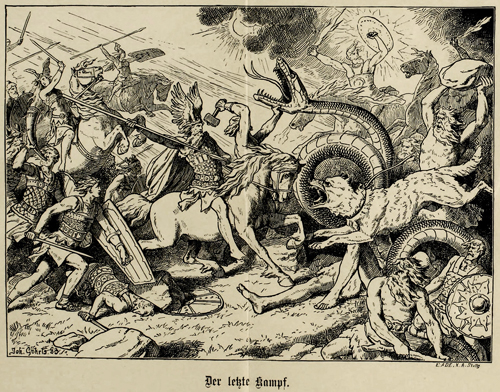 We make heroes of warriors who fight against hopeless odds; like Arthur at Camlann, the Spartan’s at Thermopylae, or Texan’s at The Alamo, though we generally don’t wish we had been there! Everyone who has seen Gandhi understands that non-violent warriors can be heroes too, and I suspect we have even less appetite for facing jail, beatings, and bullets without any weapons.

Gandhi picked up on a long eastern tradition of martial spirituality underpinning the stories of great warriors, with the implicit understanding that the hardest battles are the ones fought within. In the Samurai tradition of Japan, the greatest conquest was understood to be overcoming one’s own fear of death (Spiritual Principles of the Samurai).

The heart of The Mahabharata, the world’s longest epic poem, is the Bhagavad Gita, the best known Hindu scripture, which inspired both Yogananda and Gandhi. As two armies line up for battle, Arjuna, the consummate warrior asks Krishna, his guru and chariot driver, to drive into no man’s land. There, Arjuna throws down his weapons and says he will not fight. How can it be anything other than sinful to be part of a slaughter and cut down dear relatives?

Yogananda, like other Hindu masters, said the story of the outer, historical battle, is a metaphor for the spiritual aspirant’s effort to overcome inner rebellious “relatives,” those harmful habits that keep us in a deluded state. The why of the battle is that this is his dharma, or duty, to which no sin will attach if he can act without the related enemies of fear and anger.

This clip, which is really only a trailer for the Gita, gives a hint of how Krishna helps Arjuna see where his duty lies and helps him find the path to virtuous inner and outer action.

“If the times are hopeless, why do we fight?” When the boy asked this question in the clip in the previous post, he did not receive an answer – an appropriate response, since everyone has to figure this out for themselves.

In the end, those we admire, in myth and history, having glimpsed what is right, cannot do anything else. These are the fortunate ones, who make it through life’s metaphorical battlefields with their souls intact.