Last week, two posts on npr.org opened a startling window on the capacity of well tended small gardens. The first article, “Why Micro-Gardening Could Go Big,” discussed the UN’s Food and Agriculture Organization (FAO) as a large supporter of micro-gardens, defined as “intensely cultivated small spaces.”  They claim that an 11 square foot garden can produce “as much as 200 tomatoes a year, 36 heads of lettuce every 60 days, 10 cabbages every 90 days, and 100 onions every 120 days.”

The post features a number of links to other sites with numerous links of their own, and it soon becomes clear that many groups and individuals are finding new ways of boosting yields.  As I discussed recently (Good news on the food front), unless agriculture finds ways of keeping pace with population growth, disaster is a mathematical certainty.

These articles show that there are far more efficient configurations than traditional, single row gardens. Raised beds and containers are common features of the gardens pictured online.

One nice thing about these photos is that they make you want to get your hands dirty! Maybe not this afternoon, with temps in the mid 90’s, but I’ve already got a spot in mind for the fall and spring.  We used to have a veggie garden when we lived north of here and had more time and far better soil.  With micro-gardens you don’t need large amounts of time or good soil to get started.

NPR’s second post, Micro-Garden Madness, has additional photos of places where people are growing things.  Unlike the ambitious plots at the local community gardens, where you often see couples and families work long hours on weekends and evenings, the smaller gardens can work for people who spend their evenings and weekends in strange pursuits like blogging.

Phil Weiner co-founded a company that makes products aimed at micro-gardeners.  “Everyone in the world should have a victory garden,” he says.

Can we even begin to imagine what such a world would be like?  With these articles and photos, we can begin to envision such a transformation.

In several recent posts I’ve expressed the opinion, and quoted others expressing the opinion, that traditional institutions and governments are no longer able to deal with the most serious problems facing nations and the world (see Notes on Tricksters, The North Wind’s Gift, and The Unwinding book review).  An image that comes to mind is the Titanic, whose rudder was simply too small for her bulk. 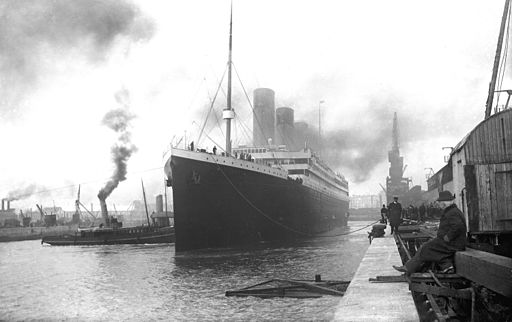 At the same time, I’ve been watching for stories of positive change that appear under the radar when people and organizations try out new things in new ways.  One of the most dramatic was a series on agricultural innovations called “Food for 9 billion” that aired on the PBS Newshour the week of June 10-14.

Those who watch PBS, as well as those who have read Dan Brown’s Inferno, know what the title means:  nine billion is the UN projection of world population in 2050.  Eighty percent of those billions will live in cities, dependent on food from shrinking acres of arable land.  Food will have to be trucked or shipped in even as oil supplies decrease.  Dickson Despommier, an ecologist at Columbia University, puts it in simple terms:  “We’re going to reach a tipping point really soon where traditional agriculture can no longer provide enough food for the people living on the planet.”

One of the PBS stories centered on Singapore, where five million residents crowd an island with only 250 acres of available farmland.  Jack Ng, a 50 year old engineer,  founded Sky Greens, a vertical farming configuration that features four story greenhouses.  Stacked beds of vegetables rotate through nutrient baths, then back into the light, like slow-motion ferris wheels.  They are driven by gravity-fed water wheels, and the energy cost of each greenhouse is $3 a month!  Singapore’s population embraces the fresh vegetables Ng provides, and the Directer of Singapore’s National Institute of Education says, “I think, eventually, urban factories for vegetable production will take the place of electronic factories in Singapore.” 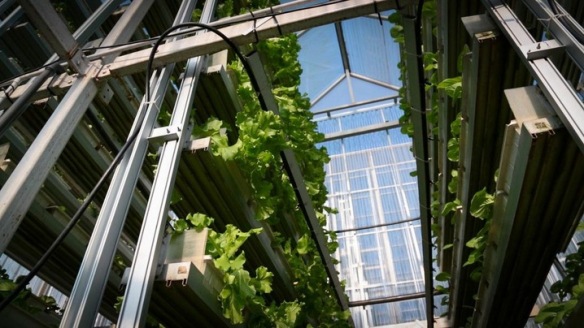 Another Newshour account centered on farmers along the coasts of India and Bangladesh who directly experience the effects of climate change.  Rising oceans take 600′ of land a year along the fertile Ganges delta, and increasingly powerful storms, like Cyclone Aila in 2009, flood rice fields and farms with saltwater.  Four years after the cyclone, the only crop that will grow where the storm surge reached is a salt-tolerant strain of rice, developed by small farmers a century ago.  Crops promoted by government and agribusiness, which promised high yields with the use of chemical fertilizers, were the first to fail.

One farmer on the Ganges delta says the old seeds are worth more to him than gold.

The so called “green revolution” in India, the introduction of high yield and sometimes genetically modified seeds along with nitrogen fertilizers, began in response to the loss of agricultural land to growing cities.  After several decades, however, yields are falling, the required amount of chemicals are rising, and scientists like rice conservator, Debal Deb, are trying to collect the old seeds, adapted to local conditions and weather extremes.  One 64 year old farmer grows 30 different traditional varieties of grains and vegetables on two acres of land, using seeds developed a thousand years ago.  The crops can withstand salt, drought, flooding, and local pests, so they need no chemical fertilizer or pesticides.

A third program in the PBS series shows efforts to improve dry land farming in the desert nation of Qatar.  It shows that agribusiness can play a positive role in adapting farming to a changing climate.  Two large fertilizer companies helped fund the The Sahara Forest Project, which has an experimental desalination plant in an urban industrial zone.  The plant also aims “to produce food and water and energy that actually reduces the amount of carbon dioxide in the atmosphere.”

Jonathan E. Smith, now with the Qatar National Food Security Program, grew up on an Oklahoma farm, with grandparents who were dust bowl survivors – he knows about drought.  Saying it would be foolish for the nation to place all its hope in a single technology, he demonstrated a low tech solution developed by one desert farmer, who reduces water usage and waste with a series of inexpensive plastic greenhouses.

Notably absent in this series are agricultural innovations from the developed nations, which have not, in any collective sense, admitted there is a problem.  Countries already familiar with scarcity and rising food import costs do not have the luxury of delaying work on long term solutions.  Here, as in many other arenas, innovation tends to come from outside the status quo.

This echoes the European trickster stories I recently discussed (links at the top of this post).  In this genre, the heroes are often middle-aged or older, having worked on a farm or served as a soldier for decades.  The stories begin when these protagonists wake up to find they are on their own.  Increasingly, I think this is the story of people in all modes of life, from all countries, who no choice but to find new paths through the world.