An inspirational article in Sunday’s Sacramento Bee reminds us of what can be done when governments are composed of adults who are willing to work together toward a common goal.

An agreement between the California State Parks Department and local Indian tribal governments allowed an important ceremonial structure, closed for five years because of fire damage, to be reopened for an annual all-tribes gathering for dance and ritual this past weekend.

In question was the roundhouse at Indian Grinding Rock State Park, or Chaw’se in the Miwok language. 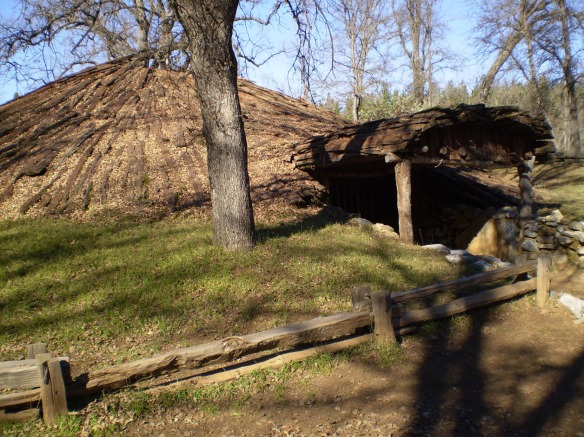 Chaw’se Roundhouse, photo by Mary Mussell. When this photo was taken, Jan. 2011, the structure was closed

The state said the cedar roof on the roundhouse, which is 60′ wide, had to be replaced, but the tribes could not agree on how to approach the task without disturbing ancestral spirits. Finally, Adam Dalton, chairman of the Jackson Rancheria Miwoks, offered to bring in a native construction crew, to work in cooperation with a state appointed structural engineer, while dismantling the damaged parts of the roundhouse with proper ceremonies.

Local tribes gathered each fall for thousands of years in the Grinding Rocks area to harvest the abundant acorns.  The park takes its name from the 1185 mortar holes left in the soft limestone slabs, where native women ground the acorns.  Some of the petroglyphs, carved between the mortar holes, are 2,000-3,000 years old. 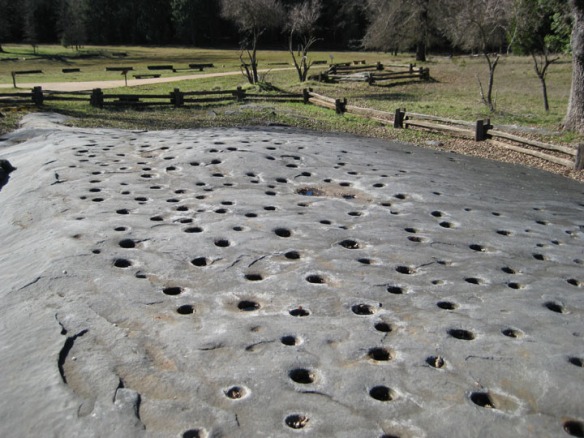 The park, some 50 miles southeast of Sacramento, near Jackson, is one of my favorite destinations in the foothills, especially at this time of year or in the spring.  If you’re ever in the area, it’s well worth a visit.  Detailed information and history can be found on the park’s website.

Now, in addition to natural beauty and historical interest, the grounds at Chaw’se stand for the way governments are supposed to work.

In the late sixties, Terry Talbot and his younger brother John began playing music in Chicago.  A friend and local record producer suggested they do what they were best at, an amplified country rock sound, as influenced by The Byrds.  The brothers formed a band, Mason Proffit, and released their first album in 1969.  Terry was 21 and John, who had dropped out of school to play music, was 15.

Over the next four years, Mason Proffit played as many as 300 shows a year and released five albums.  Once, while they jammed with The Nitty Gritty Dirt Band, Earl Scruggs called John Talbot “the best banjo player I’ve ever heard.”  The Eagles credited Mason Proffit with some of the inspiration for “Hotel California.”

After the band split up, Warner Brothers re-released Mason Proffit’s first two albums as a compilation, “Come and Gone,” in 1974.  I was in Arizona and a pretty big fan of country music when I heard it.  Nearly 40 years later, I still enjoy the sound and the eclectic mix of styles.  There’s hip country music, like The Byrds.  There’s mainline country, though with tongue planted firmly in cheek:

There is Christian rock, the musical direction the Talbots took after the band broke up, and there are topical songs, like “Two Hangmen,” which was banned by the FCC.  The lyrics seem tame to us now – “He was guilty then of thinking, a crime much worse than all,” – but in 1974, the Nixon administration was fanatically paranoid.

If you are still reading this post, you may be wondering why I would write about a band that broke up 40 years ago and that few have ever heard of.  It’s because lately, one of their best songs, “Flying Arrow,” has been playing in my head.

Several cuts on “Come and Gone” focus on the plight of Native Americans.  On that level alone, the song is outstanding. “Flying Arrow” tells a heartbreaking truth that is all too apparent in towns likeFlagstaff and Gallup.

My tribe is called the Cucupa
And we build our homes of cardboard
A desert floor
Nine by Twelve of sorrow.”

Mason Proffit lyrics are seldom one dimensional, and this song is far more subversive than the one that was banned.  As it builds to its climax, “Flying Arrow” holds up a mirror that was all too familiar then and is all to familiar now, in light of the current events, right now, right here, this month, this week, in this nation.

The kind of morale that turns football games and nations around, was in play when the song was released.  We understood the song, got the poetics, the gist, but didn’t truly believe we were dying as a nation.  Not then.  Call it the optimism or arrogance of youth, but enough people believed and acted on those beliefs that things turned around.  For a time.

What’s the temperature now, what’s the morale like?  How is the optimism level?  What do people believe?  This song remains a living thing for me, because now, 40 years later, sometimes I truly feel that as a nation we’re already dead.

Terry Talbot still plays with “The Mason Profit Band.”  You can visit their website here: www.masonproffit.com. A half dozen free downloads of recent songs are available.

John Michael Talbot sings gospel music, has formed a Catholic monastic community, and has recently published a book on the Jesus Prayer. His website is here: johnmichaeltalbot.com.

Mason Proffit’s original music, including “Come and Gone,” is available on iTunes.