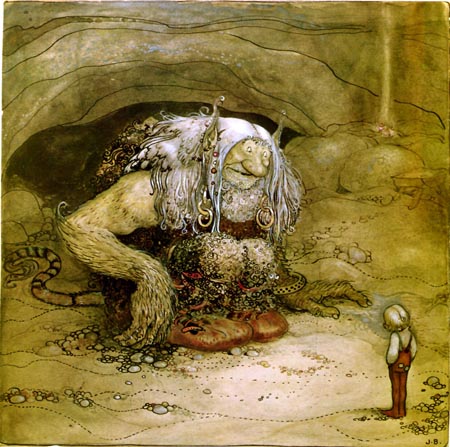 NOT THAT KIND OF TROLL
John Bauer, 1912 illustration, public domain

Social media algorithms effectively isolate readers of one type of political news from opposing views; if you follow Fox News, you won’t see MSNBC pop up and vice versa. At the same time, you can usually judge the importance of the “breaking news” of the day by the number of profane, violent, vitriolic comments that follow. I have received, if not death threats, at least death wishes, for comments on Facebook I can’t even remember, and I know I’m not alone in this. Does such overheated rhetoric reflect the national mood? I’ve come to think that in many cases, it does not, though some interests would have us believe it does.

On July 11, in an opinion piece in the Washington Post, David Rothkopf, said, “Russia’s primary goal was not to get Trump elected. It was to weaken the United States” (emphasis added).

That’s worth pondering at length. It crystalized my sense that a significant part of the national tension over our “house divided” is a creation of social media, and much of it may derive from the focused efforts of foreign trolls.

On the evening of July 11, the PBS Newshour aired a report by Nick Schifrin, with the help of the Pulitzer Center on Crisis Reporting, Inside Russia’sPropaganda Machine. Schifrin reports that for the past two years, the Russian military has run online recruiting adds, offering soldiers a chance to “put down their guns and fight a cyber-war.”

Schifrin interviewed a former Russian troll, Marat Mindiyarov, outside of a large complex in St. Petersburg which Mindiyarov identified as the headquarters of this effort. He said he had “maybe 20, 30” online identities, but implied that some have hundreds.

At the end of May Newsweek reported that 900,000 blank twitter accounts had popped up as Trump followers that month. They were easy to spot – no photo, no byline, no tweet history. And no way for a casual viewer to determine their place of origin. I initially assumed they were created by Trump’s team. Now I have serious doubts.

Again, I refer to Rothkopf’s piece, cited above. It’s very much worth considering that our external enemies no longer care if Trump stays or goes – as long as we as a nation stay angry and divided against each other, they have won…

Cyberspace is atwitter – literally – with news of Mr. Trump’s call for renewed stockpiling of nuclear weapons.

DON’T FALL FOR THE SLIGHT OF HAND!

We’ve been down this road before. How often, in the face of scandal, has this TV star and drama queen shifted our attention to something outrageous, to get us all shouting, “That’s outrageous,” while we loose focus on the real issue?

He knows media, he knows propaganda, he knows misdirection. He’s a very good stage magician and master of what is false

What matters is the Russian hacking, and what knowledge Mr. Trump and his cronies may have had of this. He never let go of Hillary’s emails. We must not let go of demanding disclosure of CIA information, and a bipartisan investigation to get to the truth.

A renewed arms race would demand congressional budget approval, something not likely to be forthcoming when generals and every representative and senator involved in military planning understands that American 21st century warfare is likely to center on cyber attacks and countering lone wolf terrorists.

Mr. Trump is like a drug dealer, tweeting our daily adrenaline fix. Enough! It’s time to let go of the drama and keep focus as the miasma clears and we see what he’d rather we didn’t.

Note: I won’t use pictures in posts on this man, nor say the name of the office he won, an office that bears an honor of which Mr. Trump is not worthy.