Daily updates on the deadliest fire in California history are almost too horrific to take in. The Camp Fire, named after its place of origin on Camp Creek Road, has destroyed the town of Paradise. This is a beautiful part of California, just a few miles east of Chico where Mary and I once lived.

The ever-changing toll stands at 71 people known dead, more than 1000 missing, and as many as 12,000 buildings destroyed. Fifty thousand people have been displaced. Breathing the air for a day in San Francisco, 150 miles away, is equivalent to smoking 11 cigarettes. (1).

At the same time, stories of generosity emerge as vividly as the deadly statistics. A former NFL linebacker, who lived through the Santa Rosa fire, paid for three large truckloads of bedding and similar goods to be sent to those in shelters. Individuals and businesses throughout north state are doing what they can to help. There are stories of people displaced by the fire spending their days sorting donated goods to benefit others. Here is another dramatic account from the LA Times on November 12: END_OF_DOCUMENT_TOKEN_TO_BE_REPLACED

On monday, in his inaugural speech, President Obama said that ignoring climate change amounts to betrayal of our children and future generations.

Also on monday, Justin Gillis, a New York Times writer, published the findings of geologists whose study of the location of fossil deposits adds some real numbers to the threat of rising oceans.  With a rise of “only a couple of degrees Fahrenheit, enough polar ice melts, over time, to raise the global sea level by about 25 to 30 feet.  But in the coming century, the Earth is expected to warm…perhaps 4 to 5 degrees, because of human emissions of greenhouse gasses.” http://tinyurl.com/bz4qkry

And again, on Monday, Thich Nhat Hanh, the Vietnamese Zen master who Martin Luther King nominated for a Nobel Peace Prize, was quoted in an article in The Guardian speaking of climate as the great crisis facing civilization over the next century.

“The 86-year-old Vietnamese monk, who has hundreds of thousands of followers around the world, believes the reason most people are not responding to the threat of global warming, despite overwhelming scientific evidence, is that they are unable to save themselves from their own personal suffering, never mind worry about the plight of Mother Earth.”  http://tinyurl.com/atdu2dz. 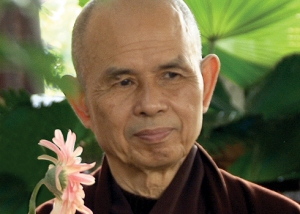 Hanh, who is known by the nickname, Thay, has been a proponent of “engaged Buddhism” since the 60’s, when he came to this country to speak out against the Vietnam war.  Now he refuses to sidestep the seriousness of our environmental crisis.  Noting that people with vested interest in the status quo are unlikely to change, he says we need the kind of grassroots movement Gandhi organized, but insists it will only work if “activists first deal with their own anger and fears, rather than projecting them onto those they see at fault.”

Thich Nhat Hanh has written more than 100 books, the most popular being The Miracle of Mindfulness.

His writing often seems deceptively simple, but it’s a hard won simplicity, forged in daily meditation over the seventy years since his ordination. His concepts are born of realization rather than doctrine “By recognising the inter-connectedness of all life, we can move beyond the idea that we are separate selves and expand our compassion and love in such a way that we take action to protect the Earth.”

What are the alternatives?  This is an important article and an important issue to face, since the potential cost of ignoring it continues to rise. 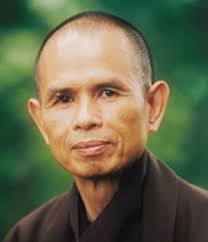