If I’d had any idea how good this book is, I would have read it much earlier. I have never come across a better introduction to Buddhism, one that is neither too esoteric nor too simplistic.  The author aims to present the core teachings, independent of custom, convention and eastern cultural trappings.  Some of his conclusions may seem surprising.  For instance, he clearly states that practicing Buddhism as a religion is fine, but it isn’t essential, because the Buddha’s central teaching is simply the importance of exploring the mind, including thought, sensation, and emotion, for that is where our suffering happens and where we experience it.

Dzogchen Ponlop’s experience as an easterner transplanted to the west makes him uniquely qualified to speak of this eastern tradition transplanted to the same soil.  When instructors at Columbia University asked him to introduce himself, he was at a loss.  Born of Tibetan parents in exile in India, and emigrating to New York City, he wasn’t sure who or what he was. 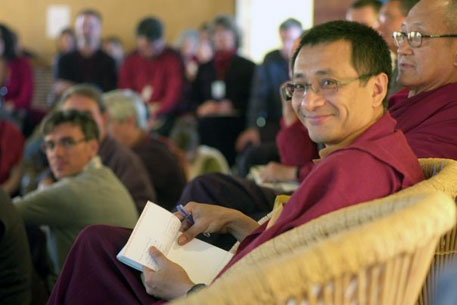 Such disorientation as a prelude to an unexpected opening of awareness parallels the realization of selflessness, which is central in Ponlop’s exposition of the Dharma or teachings.  We look in our body and mind for the “self,” and when we finally realize we cannot find it, thinking may stop, allowing us to experience a moment of pure, unconditioned awareness.  This, he says, is “our fundamental being, our basic, open and spacious awareness.  Imagine a clear blue sky filled with light.”

The fundamental cause of our suffering is clinging to a sense of self that is not only illusory, but divides ultimate and indivisible reality into a minefield of pleasures and pains, friends and foes, of the ego.  The Buddha’s terms “emptiness,” and “selflessness” have negative connotations in the west, but Ponlop explains that the actual experience of these states is anything but heavy or depressing.  “When we have a genuine experience of emptiness, it actually feels good…It’s not a vacuous place where everybody is desolate and moaning about something – that’s our ordinary life.”

Ponlop’s title, Rebel Buddha very naturally references the historical Prince Siddhartha, who abandoned all the privileges and responsibilities of a crown prince in his search for spiritual truth.  The title also calls to the indestructible potential for true freedom in each of us.  The rebel buddha within is that unconditioned awareness, “a trouble-maker of heroic proportions,” that will accept nothing less for us than the freedom that all the historical Buddhas discovered.  The actual word, “buddha,” does not refer to a few people only, but means, “awakened,” and is part of our own nature.  Even the willingness to investigate whether this is true can be enough to set our feet on the path.

Ponlop quotes from a famous teaching the historical Buddha gave to the citizens of a town who were confused by the conflicting teachings they had received from a number of itinerant preachers – not so different from what can happen to any seeker now who takes a few workshops an buys a few books on spiritual topics.  Buddha advised the citizens not to take the word of any authority or scripture, and not even to take his word, but to put the various teachings into practice, and “after observation and analysis, when you find that anything agrees with reason and is conducive to the good and benefit of one and all, then accept it and live up to it.”

There’s a lot of that in this book of Dzogchen Ponlop, a spiritual master who writes as a fellow traveller on the road.