1  an intervening period of time.
2  something performed during a theater intermission.
<special usage>: a temporary amusement or source of entertainment that contrasts with what goes before or after.

Normally the valley is brown by September, but weather has not been normal this year.  Extreme rainfall this spring and recent thunderstorms have kept parts of the valley bright green. 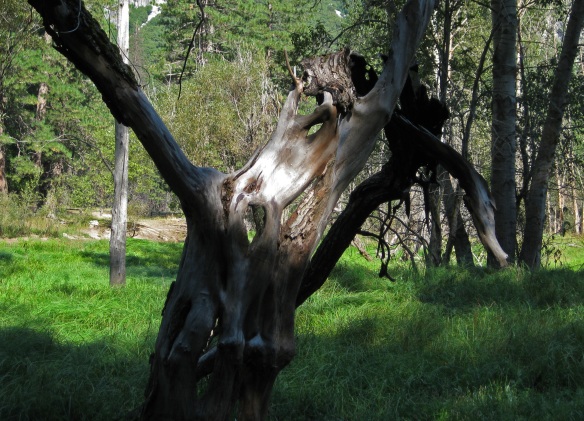 Stump in one of the meadows

Over the years I’ve found the beauty that moves me most right at hand, right in front of me on a walk, rather than the famous scenes, the stuff of picture postcards, which are almost too much to take in.

Along the south fork of the Merced River

I first saw Yosemite when I was 12.  My family came up year after year, in all of the seasons, as often as they could.  I got my first job up here, washing dishes and flipping burgers, because I wanted to stay for a whole summer.

Mary and I first came up soon after we met, and have continued to visit these woods for the last 35 years, by ourselves and with family, friends, and dogs.  Mary took this photo near the Awahanee:

Some of my favorite spots are outside of the valley. Chilnuala Falls, in Wawona, near the south entrance to the park is one of them. As people learned all too well this year, you have to be careful when hiking and climbing, and once you get away from the crowds, keep an eye out for mountain lions too.  Still, I’m sure driving is infinitely more dangerous. 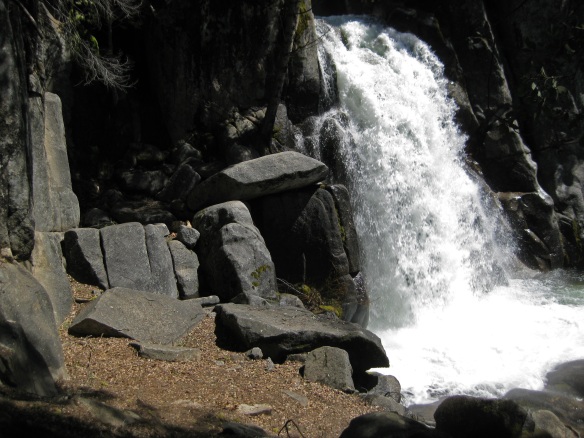 I know this area better than any other place on earth.  I’ve photographed here for decades, in all seasons and in all kinds of light. Nothing is ever the same twice. You truly cannot step into the same river – or walk along the same riverbank – twice.

The Road goes ever on and on,
Down from the door where it began.
Now far ahead the Road has gone,
And I must follow if I can.
Pursing it with eager feet,
Until it joins some larger way,
Where many paths and errands meet.
And wither then? I cannot say.
– J.R.R Tolkien

8 thoughts on “A Mountain Interlude”