I met Barbara Kloss a year ago at a California Writer’s Club workshop. We talked during the breaks, and later traded a few emails, based on a shared interest in young adult fantasy, but we lost touch when she and her husband moved to Phoenix.

Last fall, when Barbara emailed that she had published her first novel to Smashwords, I offered to review it here.  Due to the holidays and a penchant for multi-tasking, I am only getting to it now.

Daria Jones lives on a ranch outside of Fresno.  Her biggest worry is talking her overprotective father into letting her go away to college – that is, until her father disappears, and two non-human creatures show up at the ranch to kill her.  Family friends she has known all her life hustle her through a portal into Gaia, a world where magic not only works but can easily get you killed.

Gaia’s Secret introduces an appealing heroine whose 21st century sensibilities do not mesh well with the her destiny as a “special” child who was hidden away for her own safety.  Daria reacts as we might, with anger and fear, as all of her certainties crumble.  She doubts herself, her sanity, and her friends in turn.  It is her human failings, her pouts and impetuous actions, that make her so appealing, and save her from the “secret princess” cliche of so much YA fiction.

Early in the story, an ally of Daria’s father plays chess with her as her party hides from pursuit.  “You learn a lot about a person by their strategy,” he says.

“What about a person who has none?” Daria asks.

“Having no strategy is still a reflection of character,” her father’s friend replies.  “You’re impetuous and you don’t understand the consequences of your actions.  And you don’t have the patience to learn, which prevents you from making good decisions.”

Daria fumes but later admits that he’s right as her party ventures farther into a magical world where bad decisions become increasingly dangerous.

Structured along the lines of Joseph Campbell’s hero story, Gaia’s Secret also appeals as a quest tale and a romance, thought Daria’s temper and “bad decisions” lead to muddles on all fronts.  They ultimately deliver her into the hands of the traitor who started by sending assassins to kill her on earth.

Can Daria harness her newly emerging and uncontrolled magical powers in time to save herself, her father, and friends?  Since Ms. Kloss has said on her website that she is working on the sequel, I don’t think it’s a huge spoiler to say the answer is yes. http://scribblesnjots.blogspot.com/ 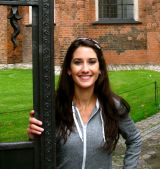 Daria attains her quest in the end.  She and her father are reunited in safety.  She and her heart throb finally admit their love for each other, but that doesn’t mean things end happily ever after.

The world of Gaia is ruled by a king, and though it’s a magical world, as a young woman at court, Daria has far less freedom than she did in Fresno.  When temper overrules caution, and she mouths off to the king, she winds up with guards outside her door – for her “protection,” and no chance to marry the man she loves.  Good thing a sequel is coming.

A click on the book at the top of this post will take you to Smashwords where you can read the opening pages.  Those who enjoy  YA fantasy will probably choose to download the rest of this lively story with its feisty and endearing heroine.