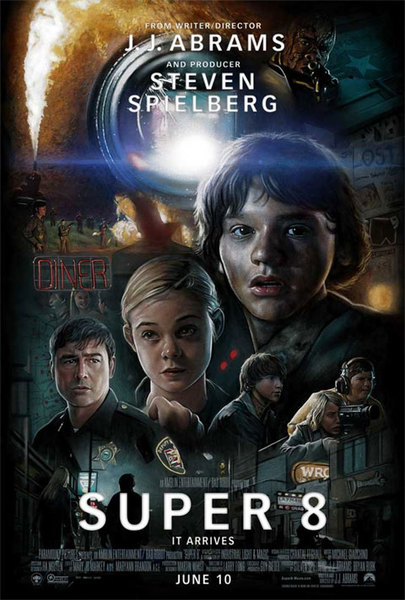 Even if you didn’t know that Steven Spielberg was involved in the production of Super 8, 2011, you would think of him and the parallels to ET, 1982.  Both movies appeal to all ages, but center on the courage, creativity, and compassion of young people.  Best case, the adults need to be reminded of what really matters; worst case, these are the things they oppose.  Spielberg sat on the storytelling committee with director, J.J. Abams, and helped produce Super 8.  The film won numerous awards and nominations, for its special effects and the two young stars, Joel Courtney and Elle Fanning.

It is 1979 as the film opens.  Fourteen year old Joe Lamb (Courtney) mourns the death of his mother in a factory accident.  His father, Deputy Jack Lamb, blames the father of his son’s friend, Alice Dainard (Fanning), since his wife was working the shift of the elder Dainard, out with a hangover, when she died.

Meanwhile, Joe’s friend, Charles, is making a super 8 zombie movie for an international competition.  He enlists Alice as the love interest in the film, and she and Joe are soon smitten with each other.  One night they sneak out to film a scene at the station against the backdrop of a passing train.  As the camera rolls, a pickup drives onto the track and causes a major derailment.  The pickup’s driver, Dr. Woodward, their biology teacher, is badly injured, but pulls a gun and warns them to forget all they’ve seen or their parents will be killed.  As the kids drive away, an Air Force convoy arrives to secure the scene.  The convoy leader, Colonel Nelec, discovers a super 8 film cassette and sets out to find whoever made it.

Things in town start to get weird.  All the dogs run away to the next county.  Electronic devices begin to disappear.  All the engines in all the cars at a local dealership are stolen overnight.  Nelec’s forces surround the town and begin knocking at doors.  Joe and Charles sneak into Dr. Woodward’s house and discover why he was trying to derail the train.

There are plenty of nail-biting moments, and when things come out right in the end (you never really doubt it in this kind of movie), we get to see Charles’ zombie production, which is a charming ode to amateur movie making and the creativity of young people

Super 8 is well worth a viewing.