I found this during a year-end cleaning of my “Drafts” folder – an unfinished post inspired by a newspaper article in July which details the life’s work of unsung folk artist, Arthur Harold Beal, garbage collector for the town of Cambria, CA.

Just down the road from the Hearst Castle, that world-famous monument to excess, lies Nitt Witt Ridge, the house on the hill that Beal lovingly crafted of driftwood, river stones, beer bottles, abalone shells, toilet seats, and other assorted junk.  Beal started work in the 30’s was still going in 1992, when he died at the age of 96. 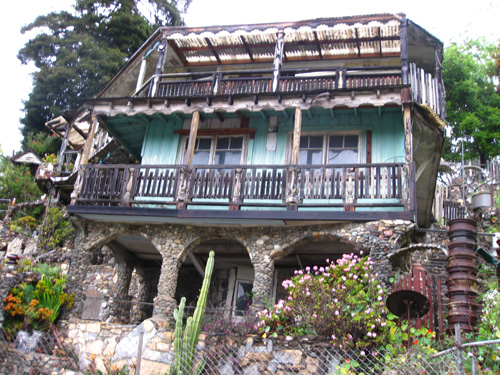 Michael O’Malley, a plumber in town, bought the Ridge for $42,000 in 1999.  Unfortunately, the sale price did not include water rights, so he and his wife cannot live there, and because it is zoned residential, they can’t open the house for public tours.  Several times a week in the summer, O’Malley gives private tours, in return for donations, to people who contact him directly.  He is something of an expert on stories surrounding the Ridge’s creator.

Beal used to say he salvaged his wood from the ocean, but O’Malley points out the quality of the material, and suggests that Beal might have “salvaged” it from local construction sites late at night.  Beal seems to have been a curmudgeon.  Some people asked to visit the house while he was still living.  If he liked their looks, he’d let them in, if not, he would shake his fist and yell, “Move along, small change.”  O’Malley found a video of Beal on a 1981 TV episode of “Real People.”  At age 81, with a long beard and a walking staff, “he looked like a mix of John Muir and Dennis Hopper.”

Here’s a brief but informative clip of O’Malley giving a tour of the house:

Last summer, when I started this post, I added descriptions of other architectural oddities, like the Watt Towers and the Bottle House of Rhyolite, NV.  The story grew too long and languished until now.

The end of the year is a good time to contemplate things like Nitt Witt Ridge.  While others compile their lists of “The Best of 2013,” here is my contribution to a list of things wacky and weird.

7 thoughts on “A great story I neglected to post”