So far in this 21st century, much of our conventional wisdom has failed us. Crazy times demand a matching wisdom, and these are crazy times. That made it all the more strange that I couldn’t seem to write a followup piece to my last post, Crazy Wisdom is No Bull, which I thought would be the start of a series.

I’ve come to believe it’s because Picasso and the others I’d planned to feature were exemplars in their fields, people we think of as “special,” a breed apart from the rest of us. This is the opposite of the real point I want to make. The modern concept of “genius” was born in the 18th century. Of far more use to us now is the original meaning of this Latin word:

“In ancient Rome, the genius (plural genii) was the guiding spirit…of a person, family, or place. The noun is related to the Latin verb, genui, genitus, ‘to bring into being, create, produce’, as well as to the Greek…word for birth.” [1]

The genius of a man, or Juno of a woman, was similar to our modern idea of a guardian angel – a protective spirit as well as a creative guide to our individual destiny  and life’s meaning [2].

From this perspective the difference between you and me and the great creative spirits of history is not that they have a genius and we don’t. It is more a matter of degree – “The Force is strong in that one.”

Since none of us really believe that some white-hatted genius is going to ride into town and save us from ourselves, it is more important than ever for as many as possible to find their genius or juno within and begin to listen and cultivate its wisdom.

“Crazy wisdom” is an old term, first used (to my knowledge) to signify a group of unconventional Buddhist masters of the first millennium. At that time, Buddhism in India had become academic, with debates among the various monastic universities as the most notable events.

No one remembers those academic Buddhists now, in contrast to the mahāsiddhas or “great adepts” who sought to renew the teachings of Shakyamuni Buddha, much as Saint Francis, who played a similar role in European Christianity.

Tilopa (988-1069), best known of the mahāsiddhas, was born in the highest caste, which he renounced, along with his monastic robes, after a female buddha told him in vision to adopt the life of a mendicant. Rich with inner wisdom, he made his living as a sesame seed grinder, an occupation analogous to those who stand on street corners waving signs today. Tilopa’s teachings are still actively studied.

Saint Francis, in his youth, lived “the high-spirited life typical of a wealthy young man” [3]. After a serious illness, contracted while a prisoner of war, he renounced his father’s status and wealth. A later vision of Jesus in a deserted chapel moved him to adopt a life of prayer, manual labor, and service, and declare Lady Poverty “a fairer bride than any of you have ever seen.”

Though Saint Francis seems familiar and approachable, there’s a risk in citing the example of spiritual giants, since none of us are likely to drop everything to preach sermons to wolves and birds. Nor would it be any kind of wisdom to do so! The wisdom of the inner genius or juno is individual! The “crazy” of “Crazy Wisdom” does not mean stupid – it means an individual is no longer in lock stop with the herd.

The images that came to mind as I pondered this theme were memories of some of the unforgettable exhibits I saw in the mid-70’s at the Museum of International Folk Art in Santa Fe.

These were the work of “ordinary”people from around the world, whose genius is the ability to glimpse a world beyond our assumptions and preconceptions and act upon their discoveries. Almost all our fields of endeavor are in need of renewal, not just spirituality or art, but artistic innovations often make dramatic impressions, like this piece from a current exhibition at the Museum of International Folk Art. 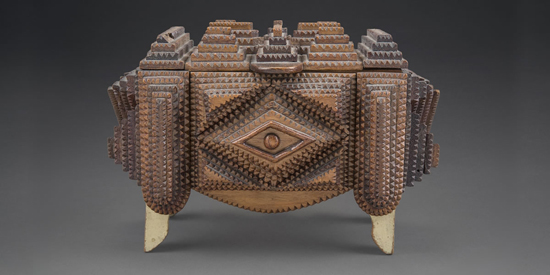 From “No Idle Hands,” an exhibit at the Museum of International Folk Art, Santa Fe, NM

Known as “Tramp Art,” because such pieces were erroneously believed to be the work of hobos, they were made of cigar boxes and fruit crates in the late 19th and early 20th centuries, not only in the US but in “France, Germany, Switzerland, Scandinavia, Canada, Mexico, and Brazil.” [4]

An infinite number of such endeavors, big or little, famous or unknown, may inspire us without any urge to imitation.

The great story of our time, and perhaps for the last thousand years in the west, is that of The Waste Land, which can only be healed by the Grail, and as Joseph Campbell, who loved this tale pointed out, in the German story of Parsifval, the grail was not one single thing, but that which was closest to every seeker’s heart. Campbell also told us that when the knights entered the forest to start their search, each sought their own way in, for it would have seemed shameful to follow the path made by another.

In other words, believing that there is or may be an inner wisdom that leads to clarity in the midst of the mess we have made of things – what does that silent urging at the heart want me to look at, consider, do? What are the small overlooked things, right now, that need to be done?

6 thoughts on “Reflections on Crazy Wisdom”