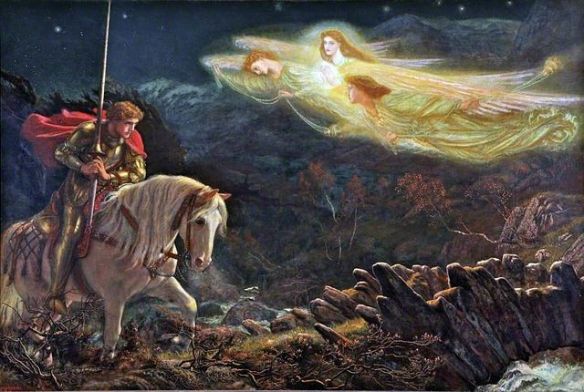 Sir Galahad, the Quest for the Holy Grail, by Arthur Hughes, 1870, public domain.

I’ve been enjoying the recording of a discussion at a conference with James Hillman and Michael Meade on literal, psychological, and mythological modes of understanding.

Hillman, a former director of the Jung Institute in Switzerland, has been the most prolific and influential of post-Jungian thinkers. He spent his life as champion of psyche, soul, and imagination in a world that has too few such champions. Hillman took particular aim at literalism, which he called “an idol that forgets it is an image and believes itself a God, taking itself metaphysically, seriously, damned to fulfill its task of coagulating the many into singleness of meaning which we call facts, data, problems, realities.” (Revisioning Psychology).

When I think of literalism, I recall the last lines of a poem a brilliant young poet I knew wrote about his high school principal:

His triple-breasted chin, arranged in folds upon his chest,
He blunts my life with a technicality.

Hillman also takes aim at much psychological thinking in books like The Soul’s Code. In this conference, he points to the 20th c. understanding that “The Gods now live in the psyche,” as a core statement of one of our greatest collective problems: the world and nature have lost their connection to the divine, and as such, are ripe for exploitation by greedy men who have traded their souls for profit. If you’ve seen one redwood, you’ve seen them all,” Ronald Reagan famously said when he was California’s governor.

Michael Meade noted that one of the hallmarks of myth is a sense of abundance. The current miasma of scarcity thinking – that there isn’t enough to go around, so you better get yours while you can – is a clear indication, if we need it, that we have no myth, no shared stories of who we are as a people. END_OF_DOCUMENT_TOKEN_TO_BE_REPLACED