My best friend gave me Dylan Thomas’ incredible prose poem back in high school. In whatever form – which now include recordings and at least one TV adaptation – it has been a part of every Christmas since then. I pass it on now, with best wishes for the holiday:

One Christmas was so much like another, in those years around the sea-town corner now and out of all sound except the distant speaking of the voices I sometimes hear a moment before sleep, that I can never remember whether it snowed for six days and six nights when I was twelve or whether it snowed for twelve days and twelve nights when I was six…… 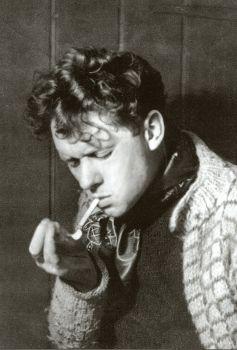 …Always on Christmas night there was music. An uncle played the fiddle, a cousin sang “Cherry Ripe,” and another uncle sang “Drake’s Drum.” It was very warm in the little house. Auntie Hannah, who had got on to the parsnip wine, sang a song about Bleeding Hearts and Death, and then another in which she said her heart was like a Bird’s Nest; and then everybody laughed again; and then I went to bed. Looking through my bedroom window, out into the moonlight and the unending smoke-colored snow, I could see the lights in the windows of all the other houses on our hill and hear the music rising from them up the long, steady falling night. I turned the gas down, I got into bed. I said some words to the close and holy darkness, and then I slept.