Not just Americans, but people around the world understand that some westerns completely transcend genre. Their stories stay with you; like the greatest drama (to paraphrase Joyce) they arrest the mind in the presence of what is grave and constant in human suffering and unite the mind with the sufferer. 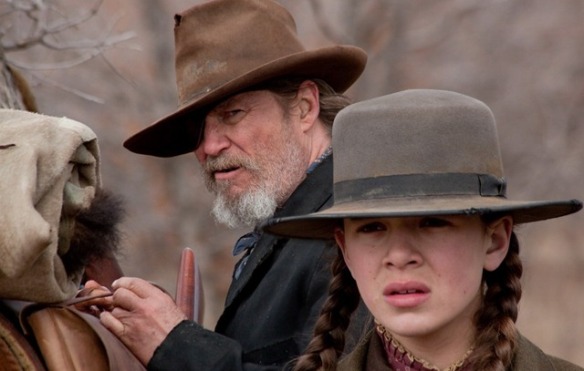 Rooster and Maddie in True Grit 2010

I think the stunning remake of True Grit may prove to be one of these.  It has the two elements I believe are at the core of unforgettable westerns – great unrequited longing and an open-eyed view of the nearness of death.

The westerns I cannot forget – and I’m going to discuss three of them – have in common, a longing that goes beyond anything specific, but is best described by the wonderful Greek word, Pothos:  an insatiable longing for what lies over the horizon, for what is ever out of reach.  Pothos means desire, longing for, regret, want….It is [a] painful restlesness. That quote comes from a website, pothos.org,  devoted to Alexander the Great, the man who conquered the world but was never satisfied.  http://www.pothos.org/content/index.php?page=pothos-2

Like any good story, True Grit begins with an appealing character, Maddie Ross, who has a compelling need:  she is determined to bring the man who killed her father to justice.  The initial motive is overshadowed as Maddie’s relationship with federal marshal, Rooster Cogburn, develops.  My friend and writing buddy, Rosi Hollinbeck nails it on her blog:  it’s a love story   http://rosihollinbeckthewritestuff.blogspot.com/2011/01/book-for-readers-and-writers.html

The key thing is, you sort of know the nature of the love between them, but can’t quite say what it is, and the characters don’t quite know what it is either, so they inevitably drift apart, though the final scene suggests this may have been the most important connection in both of their lives.

The nearness of life and death is the constant minor chord that opens the movie and is present under the stormy sky at the close.   The best westerns are not about special effects and high body counts for their own sake, and they are not about the cavalry charges of childhood saturday matinees.  To some degree, they are meditations that remind us that a life with all its hopes and dreams is a very fragile thing; it can end in an instant.

The one other thing my favorite westerns have in common are haunting soundtracks.  I downloaded Carter Burwell’s soundtack as soon as I got home from the theater.  It’s a solemn and stately musical play with the melody of a great old hymn, “Leaning on the Everlasting Arms,” here captured by Iris Dement, whose voice itself resonates with the pothos evoked by the words.

TO BE CONTINUED:  In my next post, considerations of Pat Garrett and Billy the Kid, and McCabe and Mrs. Miller.

1 thought on “True Grit, Pothos, and Westerns that Stick With You”