A critique group friend gives me back issues of The New York Times Book Review.  In the stack she gave me this week, I found a provocative article in the March 11, edition called “Convergences,” by Douglas Coupland.

Coupland noticed something unexpected during TV coverage of the 10th anniversary of 9/11:  nothing appeared very different than it had a decade ago.  The clothes, the cars, the hair, seemed pretty much the same.  This led him to speculate that:  “…we appear to have entered an aura-free universe in which all eras coexist at once – a state of possibly permanent atemporality given to us courtesy of the Internet.  No particular era now dominates.  We live in a post-era era without forms of it’s own powerful enough to brand the times.”

He then says, “The zeitgeist of 2012 is that we have a lot of zeit but not much geist.” (To Coupland’s credit, he does a mea culpa for this sentence).  He goes on to say there is something “psychically sparse” about the present, and writers and artists are creating new strategies to track it.  He then reviews Gods Without Men by Hari Kunzru, and calls it an example of “translit,” a new genre that fractures time and space while telling a single story.  In other words, it isn’t time-travel, or intercut parallel tales, like Pulp Fiction, but a singular narrative that unfolds all over the map.

Yet if Translit is a new genre, Once Upon A Time, a popular TV program, got there before Gods Without Men.   Though it doesn’t have as many sub-stories, structurally it’s the same.  Maybe part of our zeitgeist is a world where highbrow and lowbrow forms are equally likely sources of innovation.  (That sentence, containing the word, “zeitgeist,” was payback). 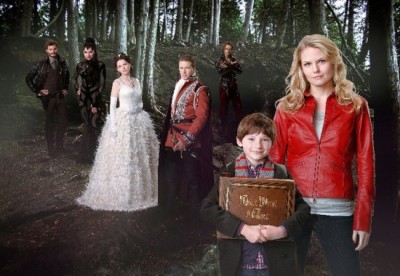 Once Upon A Time

Besides, who says this decade lacks “forms of its own powerful enough to brand the times?”

OK, when I was in grade school, my nightmares were not of winding up naked in public, but in my pajamas [this is true], so this particular fashion crime draws my attention.  But my reason for this post isn’t cultural artifacts – it’s something I’ve wondered about for a long time, that Coupland’s article brought to mind:  how and when the distinctive feel of a decade is formed?

Sometimes there’s a distinctive moment.  What we know as “the sixties” started the day John F. Kennedy was shot.  The last decade began on September 11.

Some decades don’t start with a single event; at a certain point, everyone simply knows the times have changed.  The eighties began when the good times started to roll.  In our current decade, something is rolling, but not good times.  We sense it, though it doesn’t yet have a name.  Read the paper or turn on the news, and you find a miasma of anger and greed, driven by fear and disillusionment.

This morning, with my coffee, I read details of how the New Orleans Saints bounties for injured opponents especially targeted head shots, even as overwhelming evidence points to concussive injuries as the source of higher than average rates of dementia in retired NFL players.  A little while ago I read of women arguing over a Facebook profile outside a waffle house.  Police arrived after shots were fired.  No external foe can destroy us, but we are doing pretty well on our own.

Lately politicians have been touting “American Exceptionalism.”  I first came across the term in Andrew Bacevich’s book, The Limits of Power:  The End of American Exceptionalism, 2008.  Both the politicians and Bacevich mean economic, political, and military superiority, things no country ever retains indefinitely, though they all believe they will when they have it.

President Obama got in trouble for speaking the truth when he said every nation thinks it’s exceptional.  Every nation has the potential to be, if you think in terms of character.  In those terms, our story might fall in the Translit genre – a narrative told across long reaches of time and place.  This decade would be a chapter set deep in the second act, when things are cascading downhill from bad to worse.  The darkness is pretty thick.  Who knows how the story is going to end?