Prajnaparamita, Sanskrit for “The perfection of wisdom,” is often personified as a goddess of transcendental wisdom in Buddhist iconography, as in this 13th c. stature from Java. Public domain

If you have not already done so, please read the previous post as an introduction to this one. I’m going to discuss two additional questions that are commonly asked about Buddhism. Then I’ll list some of my favorite references.

Is Buddhism a religion?

For some people it is and for some it’s not. There are Buddhist churches, similar to any other church, though westerners usually focus on the contemplative dimension with its “spiritual but not religious” nature.

The first long Zen retreat I attended was led by a Catholic priest at a Sisters of Mercy Retreat Center. This was not watered down Zen. The priest, who bears the title, Roshi (master) is member of a recognized Japanese lineage, as are other Catholic priests and nuns. The church allows this, holding that Zen is not a religion, but a means for exploring the nature of awareness. I’m not aware of any contemplative Buddhist tradition that requires members to drop their other religious affiliations.

Buddha never talked about metaphysics. He focused on suffering and the path to enlightenment as the end of suffering. Often when he was asked about ultimate things, he refused to answer. Once a monk asked, and Buddha told “the parable of the arrow.” As Thich Nhat Hahn, a Vietnamese Buddhist monk explained it:

[Buddha] said, “Suppose a man is struck by a poisoned arrow and the doctor wishes to take out the arrow immediately. Suppose the man does not want the arrow removed until he knows who shot it, his age, his parents, and why he shot it. What would happen? If he were to wait until all these questions have been answered, the man might die first.” Life is so short. It must not be spent in endless metaphysical speculation that does not bring us any closer to the truth. (the parable of the arrow).

So it’s accurate to say Buddhism is non-theistic, but it isn’t explicitly atheistic either; Buddha never said one way or the other. As Brad Warner, a Zen priest for 30 years, puts it in his book on the subject, There is No God, and He is Always With You, it depends on what you mean by “God.” If we mean some large, powerful being “out there,” who created us at some finite point in time and pulls strings, then no, Buddhists don’t believe that. If we’re speaking of something like Paul Tillich’s “Ground of Being,” then I think it’s implied in much Buddhist writing and by many Buddhist teachers I’ve heard. To quote Anam Thubten as I did in the previous post:

There is Buddha in each of us right now who can never be defeated by the force of inner darkness, the force of greed, hate, attachment, and delusion, and that Buddha has no form, no image. That Buddha, indeed, is residing in all of us as our pure, quintessential being. We must always turn our attention inward whenever we have the desire to seek divinity, or Buddha, God, or Brahma. (The Magic of Awareness) 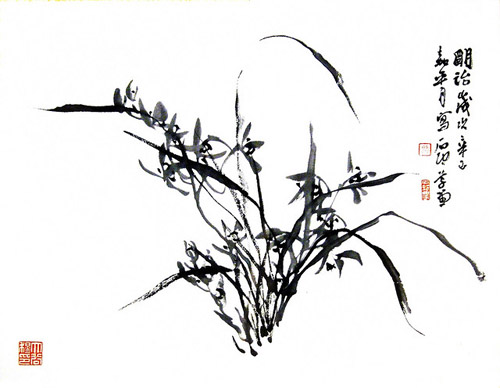 The best resource of all is a nearby sangha (group of practitioners) or meditation group in one’s own area, if it’s a good fit. Meanwhile, here are a few books and websites that I find valuable.

A Path With Heart (1993) by Jack Kornfield.
This is the first book on Buddhism I’d recommend to someone wanting to learn more. Part spiritual autobiography and part introduction to Buddhist thought and practice by an influential teacher of Vipassana (Insight Meditation). Kornfield, a co-founder of Spirit Rock (web link below), gives fine descriptions of some of the difficulties westerners may have when approaching eastern traditions.

No Self No Problem (2009) by Anam Thubten
The most important single work in turning my attention to Buddhism. I found an earlier edition of the book and attended a daylong retreat (the first of many) with Anam Thubten a few weeks later. There’s a link to Anam Thubten’s website below.

An Introduction to Tantra: A Vision of Totality (1987) by Lama Thubten Yeshe
The best introduction I’ve found to Tibetan Buddhism by a renowned 20th century lama and member of the Dalai Lama’s tradition. “Dwelling deep within our heart, and within the hearts of all beings without exception, is an inexhaustible source of love and wisdom. And the ultimate purpose of all spiritual practices, whether they are called Buddhist or not, is to uncover and make contact with this essentially pure nature.”

Awakening Joy (2010) by James Baraz
James is a teacher at Spirit Rock. I bought this book several years ago, when he gave a local daylong retreat here, and just started reading it. It’s the most “ecumenical” of all these books. The author presents 10 themes, with exercises, to increase our wellbeing now, where we are, not at some future time when we are enlightened. The book meshes with an online course he teaches. Website below.

Dharmata Foundation. This is Anam Thubten’s home page. Well worth checking the calendar from time to time. From his home center in Point Richmond, CA, this Tibetan master travels extensively. In May he gave retreats in South Korea, Little Rock, AR, and Maine. In June, he will teach in Princeton, NJ, New York, NY, Maui, and Grass Valley, CA. Hearing him is well worth the effort (here is one account I’ve posted of a retreat with him).

James Baraz. Here is James’ website and teaching schedule with a link to his Awakening Joy course (available online).

Tricycle. The pre-eminent Buddhist magazine, with 20+ years of articles from all traditions. Check out a hard copy in a bookstore for a directory of dharma centers by region. There are always online retreats available to subscribers.

Peaceful Sea Sangha. Website for Edward Espe Brown, who I’ve posted about here several times. He also travels and teaches widely, with a trip to Prague, Austria, and Germany scheduled over the next month and a half. His audio teachings are wise and hilarious. I discovered a poem I recently referenced, “10,000 Idiots” by Hafiz, in one of them.

I could go on and on, but this is already long enough. These are only a few suggestions. Feel free to comment or email with any specific questions, observations, or resources of your own.