A recent detective novel recommendation from Amazon sent me to Chris Grabenstein’s website.  What caught my attention was Grabenstein’s series of mysteries set on the Jersey Shore, in a town called Sea Haven, a thinly veiled reference to Beach Haven, where my family vacationed during three summers when I was a kid and we lived in upstate New York.  To this day, I have fond memories of those trips.

The second thing that attracted me was Grabenstein’s writing credits.  He won two Anthony and three Agatha awards in seven years, and wrote for The Muppet Show, a truly impressive credential in my estimation.

I decided to start with the first book in the series, Tilt A Whirl, 2006, both because I loved the seedy amusement park in Beach Haven as a kid, and because the kindle edition cost $0.99.

John Ceepak and Danny Boyle, two Sea Haven cops, are breakfasting at the Pancake Palace, discussing a tricycle theft – the usual sort of summer crime in town – when a 12 year old girl runs up the street in a bloody dress screaming that someone killed her father, Reginald Hart.  Someone emptied a 9mm clip into Hart as he sat beside his daughter on a tilt a whirl car in the Sunnyside Playland before it was open.  Hart was a billionaire real estate tycoon though many called him a slumlord.

Ashley Hart describes the shooter as a local vagrant and drug user known as Squeegee because he sometimes works for tips at Cap’n Scrubby’s Car Wash.  But that night, when Ashley is kidnapped from her mother’s gated mansion, Ceepak and Boyle realize there is a military precision to the crimes far beyond the capacity of an aging hippie who is missing too many brain cells.  The puzzle twists and turns and had me guessing right up to the epilogue.

Puzzling mysteries alone are not that rare.  The best detective stories also have settings that fascinate and sleuths we love to hang out with:  221B Baker Street with Holmes and Watson; the Navajo reservation with Chee and Leaphorn;  St. Mary Mead with Miss Marple or the Orient Express with Hercule Poirot.

I enjoy Grabenstein’s Sea Haven, for I share his love of Americana – of ice cream shops called “Do Me A Flavor,” or the “Scoop Sloop,” in a town “best pictured on one of those perky placemat maps dotted with squiggly cartoons of buildings like The Shore Store, Santa’s Sea Shanty, and King Putt Golf.”

His detectives are a study in contrasts and yet a complimentary pair.  Danny Boyle, the narrator, grew up in Sea Haven.  He’s a part time summer cop, in large measure because it gives him an edge with vacationing college girls in the pubs on Saturday night.  John Ceepak is new in town, fresh from a 12 year stint as an MP in the army that ended after a tour of Iraq.  The son of an abusive alcoholic father, Ceepak lives by “a Code” that his partner, Boyle admires but doesn’t fully understand:  serve and protect; never lie, cheat, or steal – ever.

The two men are bound together by a growing mutual admiration and a love of Bruce Springsteen.  By the end of the Hart affair, Danny Boyle decides to apply for full time duty.

Tilt A Whirl reminded me of a couple of chick-lit detective novels I’ve read.  I think that’s due to the humor and irony of Boyle’s first person narration.  His upbeat, “lemme tell you what happened” tone makes you want to buy him a beer at The Sand Bar and hear all about his latest case.  A lot of Danny’s humor is couched in food references, as when he describes a witness as “a few fries short of a Happy Meal,” or when, after a break in the case, he says, “I’m feeling kind of jazzed, like you do after chugging two cans of Red Bull and snarfing down some Hostess Ding-Dongs.”  I think that’s what the male equivalent of chick-lit would sound like. 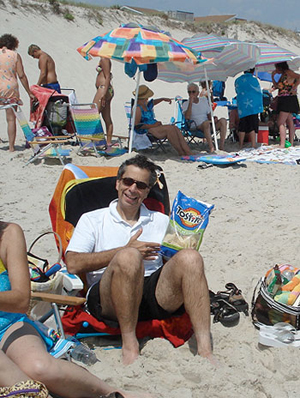 Danny Boyle has a thoughtful edge as pronounced as his irreverence.  In a key thematic passage, he quotes a math teacher who once explained Chaos Theory in terms of a tilt a whirl:  “if the operator keeps the whole thing going at the proper speed of 6.5 revolutions per minute, it’s practically impossible to predict what will happen next…The teacher called it ‘mind-jangling unpredictability.’ Chaos Theory in action,’  for two tickets a ride.”

Tilt A Whirl was a page-turning mystery that was also a lot of fun.  I downloaded the next book in the series, Mad Mouse, also published in 2006.  Stay tuned for an update on that.

3 thoughts on “Tilt A Whirl by Chris Grabenstein: a book review”